While the percentage of aging Americans opting into the multifamily living environment has seen a significant boost in recent years, according to a study released by the Mortgage Bankers Association, owning a home is still the favored method of insuring one’s financial security throughout retirement.

Mortgage Bankers Association’s Research Institute for Housing America recently released a report that found the median housing equity for the older American demographic to be approximately $125,000. The report also found that the average aging homeowner’s portfolio is, on average, made up of 50% housing wealth.

Unfortunately, the aging demographic–along with the rest of the country–was greatly affected by the housing crisis. After falling victim to foreclosures, they have since opted for renting in a multifamily apartment community.

On the other hand, 44% of aging renters are spending over 30% of their gross annual income on rent which suggests that finding affordable rental housing might be a growing issue as metropolitan areas are seeing vacancies disappear and rates going up.

For those aging Americans who are not already homeowners and find themselves with limited income, the option of seeking out an affordable apartment unit is their best bet.

Unfortunately, while these older Americans look to get the most out of their budget, they tend to have to settle for less than they require. This generates higher liability to their overall health as the probability of falling in the home sees a huge increase as the quality of housing regresses. 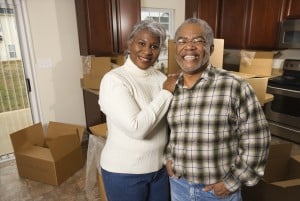 What does this mean for those multifamily property owners and investors looking to target this growing segment of the population? If the decision-makers decide to simply adopt amenities that cater to the aging demographic, like specifically engineered floor plans, while also advertising affordable rents to this segment, they should have no problem attracting new lessees.

With more than 60 million Americans over the age of 55 and a projected 107.6 million by 2030, we’re not getting any younger. In the coming decades, we can expect to see the aging American population continue to make a huge impact on multifamily real estate markets as their demand for housing continues to expand.

As the American population continues to get older, how do you see the multifamily industry accommodating this growing demographic? We’d love to hear from you.