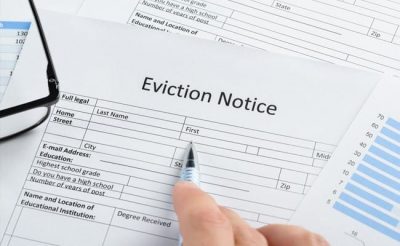 Daniel Neal’s former landlord ended up owing him money, but the owners of new apartments he inquired about renting didn’t give him a chance to explain why his name appears in New Jersey eviction records.

His Jersey City landlord wouldn’t fix a leak that ruined Neal’s belongings. He protested by not paying rent. His landlord took him to court — where Neal won.

After negotiating in landlord-tenant court, his landlord agreed to pay him six months worth of rent for relocation expenses. But Neal learned that although he was leaving on his terms, the mere existence of an eviction filing was a strike against him and made it even harder to find a new home he could afford.

Many tenant screening agencies buy court records in bulk that include any sort of landlord-tenant dispute, and landlords who use these services often reject any applicant on the list. The reports often don’t provide any background or context, such as whether a tenant was successful in the case, or whether the complaint was filed by accident, said Paula Franzese, a housing expert and law professor at Seton Hall University.

Across the U.S., 85% of landlords use screening services that include eviction reports, according to a TransUnion study.

“A lot of the time, people will judge you off of what they see on paper, and they don’t even look at the person,” Neal said. “It was hard for me. We missed out on a decent amount of opportunities just because they put accusations against me.”

The New Jersey Supreme Court and state Legislature are examining ways to prevent situations like Neal’s. The court asked New Jerseyans in September to weigh in during a public comment period: Going forward, should court records be kept private if a person wasn’t actually evicted?

“Landlords have long misused court records, making it more difficult for people to access housing if they have been taken to landlord-tenant court,” said Uche Akpa and Diane Maxon of New Jersey Together, a coalition of religious congregations and nonprofits in North Jersey, in a joint statement.

“This unnecessarily hurts people who have used the court system to address unlivable conditions and more,” Akpa and Maxon said. “In a global pandemic, with hundreds of thousands of New Jersey families behind on their rent because of the economic downturn, it will be critical that tenants are protected from this type of abuse.”

In New Jersey, tenants have the right to withhold rent if landlords fail to provide them with a safe and habitable place to live. This precedent, known as the “warranty of habitability,” means landlords must provide heat and running water and ensure there is no mold, rodents or bug infestations.

To enforce this, tenants can keep their rent in a bank account and pay their landlords when the problem is fixed, or make the repairs themselves and deduct the cost from their rent. But landlords may sue over the nonpayment of rent, and even if the court sides with a tenant exercising the right to have a safe place to live, the very existence of the court filing without context could hurt the tenant’s chances in applying for new homes.

“The very specter of appearing on a dreaded blacklist can prevent a tenant from asserting basic rights for fear that doing so will prompt an eviction action that — whether dismissed or not — will forever stigmatize that tenant,” said Franzese, of Seton Hall.

He came home multiple times to the smell of sewer water that flooded his apartment — and ruined his clothes, comforter, furniture and Macbook Pro laptop. He spread buckets throughout the apartment to catch the leaking water. He asked his landlord to fix the leaks, but no one came, Neal said.

So Neal issued an ultimatum: He would stop paying rent until they could work out a plan to pay for his ruined belongings. His landlord countered, filing an eviction notice in March, saying Neal hadn’t paid his monthly rent of $950.

Then business slowed at Neal’s contracting company because of the COVID-19 pandemic. His girlfriend, Lissette Cartagena, who lived with him, worked at a warehouse for e-commerce sales, but she took a break because the work conditions were unsafe, she said.

But as Neal, 28, and Cartagena, 24, applied for welfare to help make up for the loss of income, they discovered that the basement where they lived was not zoned to be an apartment. Neal’s landlord refused to provide them with a certificate of occupancy they needed for their welfare applications. The landlord later received a violation notice from the zoning board, according to court filings, strengthening Neal’s case. Without his lawyer, Neal said, he doesn’t know what he would have done.

More could be done

The proposed court rule amendments are a good first step, but a few tweaks could be made, housing groups and Volunteer Lawyers for Justice said in a letter to the court:

From 2000 to 2018, about 42% of all landlord-tenant cases resulted in a judgment for possession, according to Princeton University’s Eviction Lab.

The public comment period on the proposal to keep some tenant court records private ended Oct. 16, and the Administrative Office of the Courts still has to present the proposal to the Supreme Court, said communications manager MaryAnn Spoto. There is no deadline for that to occur.

The bill also prohibits a landlord from using certain eviction records when judging someone’s rental application. If a landlord rejects someone’s application, they must say why and must disclose whether they used screening information in their decisions. A landlord who violates the law would pay a $1,000 fine, and $5,000 for each successive infraction.

The bill has not moved out of committee in the Senate or Assembly.

“It gives everybody the same level playing field,” said Codey, D-Essex, a former New Jersey governor. “We have to get this moving.”

Background checks that landlords rely on can be riddled with flaws, according to an investigation by the nonprofit newsroom The Markup and The New York Times. The newsrooms reviewed hundreds of federal lawsuits against screening companies and found that people lost out on housing because these background reports pulled up criminal records that did not belong to the applicants.

In 2017, U.S. Sen. Cory Booker, D-N.J., first introduced the “Tenant Protection Act” to exclude from tenant screening reports any landlord-tenant filings that didn’t end in a judgment of possession in favor of the landlord, and filings that are more than three years old. The bill has not moved out of committee.

“Far too many families in our state and across the nation have already been harmed by tenant blacklisting,” Booker said. “Now, tens of thousands of New Jersey residents who have fallen behind on their rent due to the COVID-19 pandemic are at risk of being permanently prevented from accessing housing long after this public health crisis is over.”

David Brogan, the executive director of the New Jersey Apartment Association, said his landlord members talk to applicants whose names appear on a screening reportand ask what happened, instead of automatically disqualifying them. He said that having these eviction histories is necessary to understand if someone would make a good tenant, though it could make sense to seal records after a certain amount of time.

“The ability to see eviction records is important, as a landlord should be able to know if the person is a quality tenant or not,” Brogan said. “A landlord is taking on a tremendous amount of liability, literally giving you possession of their property. That said, I don’t think it’s something that should be public for life, and we’d be more than happy to work on legislation.”

Even before the landlord-tenant court process, it had been difficult for Neal to find a place to live.

When he was 19, Neal served more than four years in prison for first-degree robbery and possession of a weapon. He was released on parole in April 2016 to a shelter in Jersey City.

Then, a friend’s mom let him rent a room in her home until he could find an apartment. After his housing applications kept getting denied, he met the Jersey City landlord whose basement he would eventually live in for three years.

“I thought they were doing me a favor,” Neal said. “I was young.”

Neal didn’t have major problems until this year, and would have liked to continue living in the apartment if only the leaks were fixed. But he felt that his landlord forced his hand, he said.

Cartagena and Neal started touring new places to live. Cartagena put together a vision board of potential new homes. Some days, they would tour six listings, one after another.

But they kept getting denied.

On top of that, Neal’s credit score took a hit.

Eventually, their real estate agent found a landlord who was willing to let Neal explain about his prison time and eviction case. They moved into their new apartment in North Bergen in November.

“Everybody deserves a second chance,” Neal said. “You never know somebody’s story, and what a chance can give someone.”