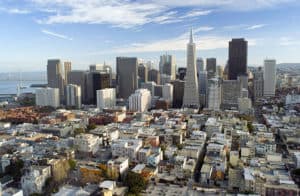 The San Francisco Bay Area is home to some of the most expensive real estate anywhere, from Pacific Heights to Silicon Valley. Technology-spawned prosperity continues to drive up rents for apartments and the price of homes moves ever-higher. To find affordable housing, workers are forced to flee to distant suburbs, where affordable housing is even more difficult to secure. And, there’s no more room in San Francisco’s 46 square miles to construct enough new buildings to accommodate the strong demand from area residents, outside of units in deluxe high-rises. These conditions have set the stage for a major housing shortage across the entire Bay Area.

Paradoxically, what is seldom discussed is the fact that the Bay Area has an alarming number of vacant properties and abandoned, dilapidated multifamily units that are not fully occupied, but offer promise. Over the last 10 years, my company has renovated and rehabbed hundreds of units in the greater San Fransisco Bay Area. The ability to conduct transformative renovations of these distressed properties represents a way to bring more housing units back on the market faster than many other options. It’s here where opportunity zone funding can make a positive difference. Opportunity zone programs, which channel funds to economically depressed areas, help stimulate not just new construction, but give older properties new life. The renovation of existing properties can be done for less cost and completed more quickly than ground-up construction, which entails a complex permitting process as well as a substantial financial investment.

Most renovations of an entire vacant property can be completed in 10-12 months, rather than the three to four years it takes for a major development project to be entitled, with another two to two and a half years required to complete construction. Given the labor shortage in construction exacerbated by rebuilding needs after the fires, the timelines for new construction may extend even further. By comparison, renovated units can be back on the market in under a year, rather than the five to seven years it takes for a new project.

In spite of the city’s bustling technology industry, vacant and distressed properties are scattered throughout the Bay Area, and frequently they are located closer to older commercial districts. Given the demand for workforce housing near major employment centers, it makes sense to update and improve the mixed-use and residential properties that are located relatively nearby.

One may wonder why there is this amount of distressed real estate located in one of the most prosperous areas of the country. Part of the challenge I see is that absentee owners may lack the financial resources or know-how to properly upgrade their property. Additionally, it can be hard to find contractors who are willing to work on a single apartment project when they have access to much larger development projects. Another problem with older apartment buildings is that many units consist of a kitchen, bathroom and single bedroom, with the kitchen and bathrooms always the costliest to upgrade. Rental income, meanwhile, may not cover the cost of improvements or the real estate owner may not have fully recovered from the Great Recession of 2008 that dramatically reduced property values.

The good news is that transformative renovations of the abandoned or neglected properties in San Francisco and surrounding communities can benefit both tenants and landlords. This is not simply by improving the appearance of the property, but also by re-engineering it from the inside out. Improvements in the energy efficiency of buildings can result in significant cost savings in utilities, trash and water — thanks to solar panels on the roof, double-paned windows and low-flow toilets. While some of these environmentally sound improvements may not be as visible to the undiscerning eye, these changes reduce operating expenses for tenants, landlords and property owners.

Transformative renovations are necessarily project-specific. Projects can range from modernizing a 1920s apartment complex to creating a live-work space out of abandoned commercial buildings or reconfiguring a 1950s suburban housing complex. Older units tended to have lots of walls, creating many smaller rooms that limit their usability. What’s more appealing to occupants today is a kitchen that opens into a great room. There’s less and less need for walled-off areas, which allows the addition of bedrooms. The expense of upgrading the kitchen and bath can be amortized over a larger unit. By utilizing space more efficiently, a renovation can add units or create larger units suitable for more occupants — with both approaches resulting in housing more people.

Meanwhile, in heavily urban areas near mass transit, garages are becoming less important. New regulations allow ground-floor garages to be converted into living spaces. Whether it’s empty-nesters or recent college grads, people are spending less time in their apartments and more time outside at work or pursuing entertainment and enjoying larger communal spaces. This enables developers to keep the size of the apartments smaller, while allowing for generous shared spaces that provide enhanced quality of life for residents.

Transformative renovations alone won’t solve the Bay Area’s housing crisis, but the benefits they bring are profound. They can increase the quality and quantity of housing available in the Bay Area near-term, while preserving the unique character of the city’s vibrant neighborhoods and diverse communities for years to come. That’s called a win-win.