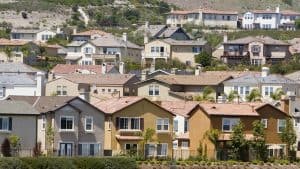 The American Dream may be in shorter supply.

A growing number of Americans now find it increasingly difficult to achieve the dream of owning a home. Simply put, they can’t afford the price or save enough money for the down payment.

A new housing affordability model created by the National Association of Realtors (NAR) and Realtor.com finds that homebuyers at many income levels could find “an inadequate amount of listings on the market within their price range” in the coming months.

“Affordability is becoming much more challenging,” said Lawrence Yun, NAR chief economist. “Home prices over the past five years have risen by 40 percent while income has only gone up half that rate, so on just the price and growth differential, there are affordability challenges.”

Buyers with lower household incomes can expect heavy competition for the listings they can afford and rising mortgage rates will hamper their ability to afford these homes, Yun told NBC News. With interest rates rising “some people on the margins” may no longer be able to qualify for a mortgage, he said.

“We haven’t seen any increases in affordable inventory in at least nine months,” Richardson said. “Starter homes are just in short supply and that’s bad for first-time home buyers and millennials. It’s hard for people with middle class incomes to buy a home, so in most American cities the middle class is losing ground in terms of home ownership.”

Coming up with that down payment

And before you can buy a house, you need to save enough to make the down payment. Cobbling together enough cash for that has become a major barrier for many, especially in places where 20 percent down can be almost $200,000.

“Home values are increasing at such a pace that in order to save up for a down payment it takes almost two-thirds of your annual income at the national level. In a hot market like Seattle, it can take more than a full year’s earnings,” said Zillow’s Skylar Olsen

Buyers in Los Angeles, San Jose and San Francisco, must come up with 182 percent of their average annual income to make that down payment, Zillow found. In San Jose, where the annual median annual income is $105,455, the down payment on the median $961,600 home is $192,320.

First-time buyers with no equity to rely on — about half of those in the market — need to get creative to scrape together that massive down payment.

“A lot of people have tapped into their 401(k) and a lot have sold stock,” said Jon Hunter, vice president at John L. Scott Real Estate, with agents in Washington, Oregon and Idaho. “They’re also borrowing from their parents. I’ve seen a lot of gifts from parents to children, especially for that first home.”

Of course, there are loans with less than 20 percent down — as little as 3.5 percent down — but the interest rates are higher and buyers are required to pay costly private mortgage insurance (PMI).

In very competitive markets, like Seattleand Portland, potential buyers often have to offer significantly more than 20 percent down to win the bidding. So what about renting? That used to be a common strategy for saving up enough to buy. But with rents so high and increasing so rapidly, even some renters find it hard to save enough. Zillow reports that the median monthly rent in the U.S. is now $1,402. It’s $3,470 in San Jose, $2,625 in Los Angeles, $2,443 in San Diego and $2,239 in Boston.