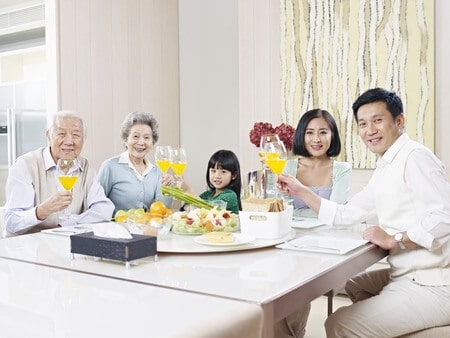 Since 2010, the popularity of in-law and multigenerational living arrangements has been a topic at the family dinner table and in home design circles. More families are combining resources and sharing living spaces, driven partly from fallout of the Great Recession and the aging of parents.

In-law suites or separate living quarters that were popular in the 1970s have been steadily etching themselves into floor plans of new homes. New homes with a suite and bath separate from other bedrooms are rivaling older homes built with separate accommodations, and then some.

In-laws or extended family can get the feeling of living separately from their kin – even have their own garage and outdoor area – but be just a wall apart.

The return of this living style is to accommodate aging parents who are bunking with their adult children and grandkids or young adults who are coming back home to save expenses.

According to the National Association of Home Builders (NAHB), custom builders are seeing an increasing need to build homes with separate living suites. Studies show that more adults have had to move back in with their parents, and that multi-generational households – those with at least three generations – are on the rise.

Homes that include the traditional “mother-in-law suite” or have a locked-off living space within the home are popular with multi-generational families. These apartment-style spaces can be homes within homes, including a kitchenette, full bathroom and living areas to provide a sense of privacy and independence.

Multi-generational households are on the rise

Steve Melman, Director of Economic Services for the National Association of Home Builders, says that recent data suggest a slight increase in the share of multigenerational households, but it’s unclear whether in-laws are living with their children or families are living with each other to minimize effects from the Great Recession.

Also, a Pew Research Center study in 2011 noted that large numbers of Americans moved in with relatives to boost the number of multi-generational households. From  2007-2009, the number of these households rose from 46.5 million to 51.4 million. Lower incomes or unemployment helped drive the increase.

But, as the economy has gained steam in the last four years and more people have gone back to work, demand for homes with separate living suites has continued to climb.

In October, the American Institute of Architects’ Home Designs Trends Survey from the second quarter 2014 noted that the popularity of designs with dedicated guest rooms or in-law suites had increased fourfold. AIA Chief Economist Dr. Kermit Baker said demand for the rooms was a reflection of families caring for older relatives.

“As many households become caretakers for aging relatives, separate living suites have become popular options for accommodations,” he said. “Homeowners want to ensure that their homes can support the needs of aging parents who may be staying for an extended period of time and other visitors with accessibility needs.”

Second master bedroom being used for the in-laws

At January’s NAHB International Builders’ Show in Las Vegas, the association’s New American Home, constructed annually to encompass all the cutting-edge home features, was a sign of the times. Nestled on the second floor of the sprawling four-bedroom, 5,891-square-foot desert contemporary home was a private casita for a nanny, visiting guests or as an in-law suite for aging relatives.

Also, in a recent survey of prospective home buyers, NAHB reported that 38 percent of respondents considered two master bedroom suites was either an essential or desirable feature.

Melman, who has written numerous research articles on the housing industry, said the second master suite has multiple uses for families depending on their needs.

“Frequently the second master suite is used for in-laws, but it could also be used for a care giver, a boomerang student or even one spouse who requires medical equipment at night,” he said.

Separate living suites should be more about content than size

No matter the occupants, an in-law suite or separate living quarters should focus more on content than size. Melman, in a 2010 article published on Angie’s List, said the suites should incorporate universal design which might include features like wider doors, grab bars and walk-in showers.

“An in-law suite needs to be about features and amenities, not necessarily size,” he said in the article. “Don’t get hung up on square footage.”

Lennar’s Next-Gen line of homes includes optional private suites within several of the company’s one- and two-story homes. The suites, which occupy one end of the home, are as large as 647 square feet and have a bedroom, bath, living room, kitchenette and washer-dryer hookups. Some floorplans have a single-car garage and separate entrances.

Pulte Homes offers options for “casitas” in its homes that include everything from an efficiency-style design to multiple bedrooms, a living room, kitchen and garage. The plans have gained popularity in recent years, especially in the Southwestern U.S., said a representative of the company.

For now, homes with these features appear to be being built for families in mind rather than investors. Melman isn’t seeing these homes going up as lease properties aimed at multi-generational families.

“A couple of years ago, Lennar and Pulte both announced new home products to address the multigenerational market, but for use as a primary residence,” he said. “I have not heard of any anecdotal evidence of investors moving into this niche market.”

Melman said more post-recession data would be needed to determine if the in-law suite trend is going nationally.