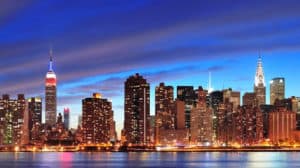 The number of eviction filings in New Jersey has dropped to its lowest level in more than a decade, and it has declined over the past five years in every county but one: Essex.

Attorneys working in tenancy law say eviction actions in Newark, the state’s largest city, make up the lion’s share of Essex County’s annual caseload of more than 40,000 cases a year. In the 2018 fiscal year, according to statistics from the state Administrative Office of the Courts, 40,725 actions were filed, or about 112 per day. One case was filed for every four renters in the year that ended June 30. That was an increase of 1.4 percent since fiscal 2014.

It’s tougher to know how many people actually wound up being evicted from their apartments because the state does not provide information on case outcomes. The Eviction Lab at Princeton University has gathered data but considers its estimates for New Jersey to be understated. That said, the project believes there have been between 13,000 and 14,000 evictions each year statewide between 2010 and 2014, meaning as many as 8.5 percent of filings end with an eviction.

While the number of filings and evictions are down from their recession and post-recession highs of about 176,000 filings and 22,000 evictions, tenant advocates say the issue is still at crisis levels. And while the state’s laws are considered to favor tenants, that benefit disappears when a tenant goes to court without representation and faces a landlord’s lawyer who is an expert on tenancy matters.

“New Jersey has a pretty favorable tenancy law, favorable to tenants, but the legal process is extremely difficult for tenants,” said Catherine Weiss, a partner at Lowenstein Sandler who chairs the Lowenstein Center for the Public Interest and operates a legal clinic once a month in Essex to represent indigent tenants facing eviction. “If you are served for nonpayment of rent, that is the only notice you will receive. You have 10 days to two weeks to put your case together.”

Those tenants who go to court — and half do not show up to answer an eviction action — face a chaotic scene and may wind up being pressured into signing papers and agreeing to pay fees to which a landlord may not be legally entitled, Weiss said.

The Essex tenancy court processes between 200 and 300 cases a day so they move quickly. If both landlord and tenant are present, they are “told to go into the hallway to negotiate,” Weiss said, adding there are “lines of tenants to see individual lawyers.” One attorney may handle 30 cases in a day. Because the tenant is afraid of being tossed out of his home, he will often agree to pay, in addition to back rent, late fees and attorney fees that the landlord’s representative is seeking.

“In 90 percent of nonpayment complaints, we see fees charged that cannot be collected,” Weiss said. “Tenants don’t know that. Without counsel, they often can’t prevail in fighting those fee charges.”

And close to 99 percent of tenants go to court without a lawyer. This makes sense, because the majority of eviction filings are for nonpayment of rent, and most people do not pay their rent because they cannot afford to do so.

Legal Services of New Jersey, which provides representation to the needy in housing and other civil matters, has lost a significant amount of its money from the state and a legal fund since the recession, leaving it with fewer resources with which to help tenants.

After taking office, former Gov. Chris Christie cut funding to the organization by roughly half, to about $15 million. A portion of the increase in filing fees from the 18-month criminal-justice reform and an increase in the new state budget have brought aid to LSNJ back up to about $27 million, but that’s still almost $3 million below what it was in 2010. The organization has taken another huge hit in lost funding from the Interest on Lawyer Trust Accounts, or IOLTA. The money, earmarked for the provision of civil legal services, nosedived with the recession and Legal Services’ funding dropped from $40 million to $5.5 million. Today, IOLTA funding has inched back up, but still totals less than $7 million.

“We absolutely need more resources,” said Melville D. Miller Jr., LSNJ president. “For the last three decades, all we have done has been triaging. We are always reprioritizing and rebalancing.”

The process is one that favors landlords, particularly when tenants cannot afford their own representation, several lawyers said.

“The system is stacked against low-income tenants and those of moderate income as well,” said Paula Franzese, a professor at Seton Hall Law School who specializes in property and tenant law. “The overwhelming majority of landlords are represented. The overwhelming majority of tenants are not. They go to court without even a fundamental knowledge of the rudiments of the court system.”

But landlords are not the bad guys tenant advocates make them out to be and are usually just trying to collect rent that is owed to them.

“Eviction is the worst-case scenario for all parties involved,” said Derek Reed, a Newark attorney who represents landlords.

He said landlords in multi-unit apartment buildings are required by law to be represented by a lawyer, and they have to pay the lawyer regardless of the outcome of the case. In the event of an eviction, the landlord does not get back rent paid and loses income for the unit for several months, usually, as the landlord has to clean and refurbish the apartment and then find a new tenant. When there is a settlement and a tenant agrees to pay back rent, he is required to pay other fees, as well, if they are specified in his lease.

“Landlords provide an important function in the economy and in the fabric of New Jersey, especially in the more densely populated areas,” Reed continued. “They are not the bad folks I think some people try to portray them to be.”

Dealing with the high number of evictions

Still, a number of advocates have been urging a range of actions to deal with the large number of evictions. For one, they are calling for additional state aid for Legal Services in future budgets so their attorneys can represent more indigent people.

Franzese said there are several bills pending in the state Legislature that are meant “to prevent the courts from becoming eviction factories” and she hopes lawmakers will move them soon.

One of the major measures is S-805, which would permit tenants to withhold rent on units that do not meet an “adequate standard of habitability.” It would also allow a court to reduce a tenant’s rent on a substandard unit and pay them for repairs that the landlord should have made but did not to make the unit habitable.

The other is S-806, which would make landlord-tenant court records private for at least some period of time and keep private the record of any case that does not result in an eviction victory for the landlord. It would also keep private any action brought by a tenant against a landlord unless the tenant agrees to make that record public.

This measure specifically addresses another problem tenants face, that of “blacklisting,” in which a tenant who has ever been the subject of an eviction filing winds up being unable to get approved for an apartment in the future. It would prohibit a landlord from considering all but actual evictions when evaluating a prospective renter, prevent the consideration of all actions against tenants that are more than three years old, and require a prospective landlord to give a copy of a screening report to anyone denied a rental unit.

Assemblyman Benjie Wimberly (D-Passaic), chairman of the Assembly Housing and Community Development Committee, said recently that he knows about the problems facing tenants in the state, and the committee will be working on bills designed to stem the evictions crisis soon.

Newark, in particular, is about to get some targeted assistance.

McCarter & English is stepping up to fill some of the gaps in assistance. Last month, the firm announced it was establishing a pro bono fellowship to help Newark residents with their legal issues. For the first year of the program, at least, the attorney will represent tenants facing eviction and work to educate tenants about their rights.

“We believe that our focus on the rights of tenants can make a real difference for Newark families,” said Michelle Movahed, the firm’s pro bono director, adding this position is likely the first in the nation to focus on a city. “Landlords file tens of thousands of eviction proceedings against tenants in Newark and surrounding communities every year. Only a tiny fraction of those tenants have legal representation, and we intend to change that.”

“This newly created position will allow our attorneys and staff to continue to make meaningful contributions that improve the lives of Newark residents by helping to avoid the disruption that evictions bring to families,” said Robert Mintz, managing partner of the firm’s Newark office, adding that the firm created the position as a result of discussions with Newark Mayor Ras Baraka.

“We are very grateful that the firm is teaming with us to protect the rights of some of Newark’s most at-risk residents, tenants waging unequal battles against landlords unjustly seeking evictions,” Baraka said.

Franzese said Baraka’s efforts in this area are heartening. The state and society must do more because of the devastation an eviction can have on a family.

“Without a sustained roof over one’s head, there’s very little in life that makes sense,” she said. “When you add children to the mix, the stress can be unbearable. We can do better. We are a state of great affluence, but also great need. We can do better.”

Read more
Despite quickly rising...
Of all the categories driving inflation in recent months, among the largest — and most persistent —...
Read more
It’s Hurricane...
The Atlantic hurricane season puts at risk 19 states that border the Gulf and Atlantic coasts — about...
Read more
Key Takeaways from...
The White House hosted a first of its kind virtual Eviction Reform Summit in early August so here is a...
Read more
Rents fell in some...
Overall, median rent across the country’s 50 largest metropolitan areas grew last month, but the Los...
Read more
The Top Destinations...
Nearly 11% of all renters interested in moving out of state chose Texas. US renters are increasingly...
Read more
Landlords try to stop...
Ballots haven't even been printed yet, but already a group of landlords, apartment managers and...
Read more
Apartment Demand...
Renters leased 700,000 additional apartments last year, more than doubling the five-year average. They...
Read more
Hurricane Ian Threatens...
The biggest property market on Florida’s west coast braces for what is expected to be the worst...