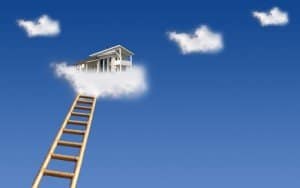 According to a national survey released this week, more renters are now hoping to own a home.

The 2013 National Housing Pulse Survey, conducted by The National Association of Realtors also found that the number of people who say they prefer to rent has declined.

NAR President Gary Thomas points to the fact that in many parts of the country, it’s cheaper to own a home than to rent one.

The survey, which measures consumers attitudes and concerns about housing opportunities, found eight in 10 Americans believe buying a home is a good financial decision and more than two-thirds (68 percent) said now is a good time to buy a home. Since the last survey in 2011, 36% of renters are now thinking about purchasing a home, up from 25 percent, while those who say they prefer to rent dropped from 31 percent to 25 percent.

Half of renters say that eventually owning a home is one of their highest personal priorities, up from 42 percent to 51 percent.

Attitudes toward the housing market have also improved over the years. Nearly four in 10 Americans (38 percent) identified an increase in activity within their local housing market in the past year, compared to just 22 percent who reported a slowdown in activity.

By contrast, in 2011 some 51 percent reported a slowdown in activity. There was also less concern than in the past about the drop in home values; a majority said housing prices in their area are more expensive than a year ago.

In addition to these improved attitudes about the housing market, respondents also showed an improved outlook about the national economy. Just under half (48 percent) said job layoffs and unemployment are a big problem, down from 61 percent in 2011. The concern over foreclosures showed a steep decline from 2011 when 47 percent characterized distressed properties as very or a fairly big problem; today only 29 percent say its a problem.

For many Americans, the perceived obstacles to homeownership have remained unchanged over the years; low wages, student loan debt, and little savings for a down payment and closing costs continue to make it difficult for many to become homeowners. Respondents across the board ” young and old, college graduates and non-graduates ” consider student loan debt to be a large obstacle.

Student loan debt is a concern for many consumers in todays market, especially first-time buyers, said Thomas. Buyers with student loan debt may find it difficult to access mortgage credit, as well as save for a down payment. Pending mortgage finance regulations requiring higher down payments could also contribute to the already tight lending

environment. Realtors are working with regulators to address this issue and are committed to making sure those who are willing and able to own a home have the opportunity to pursue that dream.

When asked for reasons why homeownership is important, respondents top reasons stressed stability and a safe environment.