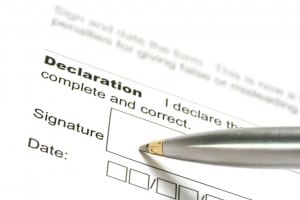 A Mission district landlord has included a clause in a rental application that lawyers say discriminates against applicants with disabilities — likely in violation of both state and federal law.

In order to apply to a two-bedroom, one-bathroom unit at 60 Sycamore St., landlords Kevin and Maria Simmonite are requiring would-be tenants to disclose information about their mental health.

“I certify that I do not have any emotional or psychological issues that would necessitate getting an Emotional Support Animal,” the application reads.

This document must be signed before prospective tenants’ applications will be processed, according to the apartment’s Craigslist listing: “Incomplete docs will not be considered.”

The Unruh Civil Rights Act is a state law that provides protection from business establishments in California, including rental housing; California Civil Code 51(b) clarifies that Californians are protected on the basis of both “disability” and “medical condition.”

The federal Fair Housing Acts also apply to tenancy in California and contain similar provisions. These laws forbid landlords from asking whether an applicant has a disability, and requires that disabled applicants be treated the same way as applicants without a disability.

Landlord Maria Simmonite confirmed to Mission Local that there was a clause asking about applicants’ “emotional or psychological issues” in the 60 Sycamore St. application. She defended her inclusion of the clause.

“That’s not illegal, to specify that no pets are allowed in this building,” Maria Simmonite said.

But Darsky points out that emotional support animals are not legally classified as “pets.”

He says that not only is inquiring about a prospective tenant’s disability status illegal, so is discriminating against a tenant with an emotional support animal.

When asked how long the Simmonites had included the “emotional or psychological issues” clause in their rental applications, Maria Simmonite refused to answer. “I don’t have to tell you that,” she said, before getting off the phone.

“Landlords can put whatever they want in the lease. It’s not enforceable,” said Darsky. “A tenant could sign that and still have the right to get an emotional support animal.”

Wasserman, who has many landlord clients, says landlords need to “get over” their aversion to emotional support animals. He makes a point of reminding the landlords he represents that tenants do not need to disclose that they have a disability or an assistive animal on their rental application.

Though Maria Simmonite told Mission Local on the phone that 60 Sycamore St. was the only building the Simmonites operate, city property records reveal multiple buildings deeded to them — and state court records document a lengthy litigious history.

Going back to 1993, Kevin Simmonite has filed at least 26 eviction lawsuits in court, naming 48 unique tenants. The lawsuits were brought against tenants living in six separate buildings, all of which were owned and operated by Maria and Kevin Simmonite at the time.

A two-bedroom one-bathroom unit at the Simmonite’s property at 55 Boardman Place was listed for rent on hotpads.com as recently as February.

As of Wednesday morning, the 60 Sycamore St. listing is still listed on Craigslist and Zumper. The two-bedroom one-bathroom is listed for $3,595 per month.

In a neighborhood where the average rent for a two-bedroom apartment hovers around $4,200 per month, even a tenant aware of the landlords’ past behavior might just take the apartment anyway.