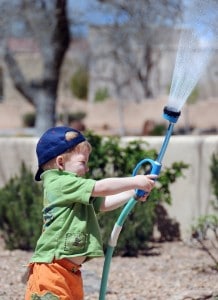 A Texas landlord whose house rules put a damper on play time is facing a lawsuit for discrimination.

He is accused of sending a notice to tenants prohibiting children under age 16– and then later age 18, from being outside without adult supervision. The notice stated, in part:

THIS DOES NOT MEAN THAT CHILDREN CAN BE WATCHED FROM WINDOWS AND BREEZEWAYS . . . IF YOUR CHILD IS CAUGHT OUTSIDE WITHOUT A PARENT RIGHT BESIDE THEM YOU WILL BE GIVEN A FINE OF $50.00 AND RENT WILL NOT BE ACCEPTED IF THIS IS NOT PAID IN FULL ASAP!

The policy was strictly enforced, according to tenants. The father of one of the families says he watched from the breezeway in front of his apartment as a staff member sent his son indoors because he was playing outside without his parent standing next to him. The mother of the other family felt compelled to drive her daughter 10 minutes to the park to avoid incurring a fine when her daughter wanted to play outside. Management fined one of the two families and issued notices of lease violations and fines to at least eight other residents.

Several months after the policy was imposed, a parent claims they wrote to management that the current policy was illegal, and requested that it be retracted. Management refused. Rather than be forced to keep their children cooped up inside, both families moved from their homes. Property management charged one of the families more than $2,200 in fees and costs, and charged the other approximately $500.

The Fair Housing Act expressly prohibits housing discrimination against families, including setting restrictive terms and conditions on tenants with children.