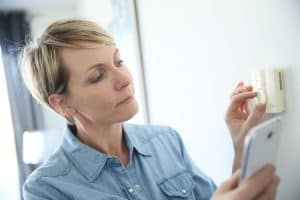 A new Urban Land Institute report delved into the effects of extreme heat and how it will change real estate in the U.S.

Extreme heat is becoming a growing concern for U.S. cities due to a combination of climate change and continuing urban development. By the end of the century, a majority of states will experience average summer temps of at least 80 degrees with some areas in California, Nevada and Texas experiencing an average of 100 degrees for summer, the report noted. Another report released earlier this year by GeoPhy also focused on climate change and pointed out how it would shape real estate.

Developing and established cities also experience the “urban heat island” effect where these areas generally hotter because they have fewer trees, air pollution and more waste heat that comes from energy usage from buildings and transportation.

The ULI report detailed that a projected increase of 5 to 10 degrees due to the heat island effect in the face of more developments and cities breaking their heat records. But widespread adoption of mitigation strategies could potentially reduce or offset this projected increase, according to the report.

The methods range from using light-colored surfaces and materials that deflect sunlight and heat, incorporating greenery like shade canopies or green roofs and walls and building “heat aware” building envelopes that prioritize things like insulation and windows that promote airflow to reduce dependence on air conditioning.

Several examples of these mitigations exist today as noted by the report. In Houston, a team of companies are working on redeveloping the main corridor of Bagby Street to include 175 large shade trees and heat-resistant paving materials. For how a specific building is working on heat mitigation, a mixed-use development in Scottsdale, Ariz. called SkySong was designed with horizontal and vertical shade screens, high-performance window glazing and considered the angle of the sun to provide shade to each of its five buildings. And for an even more expansive approach, Crystal City in Virginia that will serve as the new home to Amazon’s HQ2 will use reflective coating on more than 17,000 square feet of the campus.

While all these mitigation strategies sound expensive, they soon paid for themselves. According to the report, if all commercial buildings in the U.S. switch from dark roofs to light roofs, they’d collectively save $1 billion in energy costs. Green roofs on commercial buildings also proved to make up for their initial investment costs in two years, the report added.

Edward Walter, ULI’s global chief executive officer, said that developers, designers and policymakers are already dealing with how to address extreme heat and said this provided them with a platform to reduce climate change and create better communities.