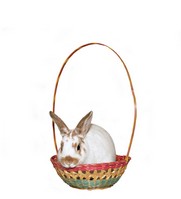 You may remember our eviction story, Landlord Gives Easter Bunny the Boot.  When a tenant set up a display of Easter Bunny Peeps on her interior door, no one bothered her.  But, when she left it there for a couple weeks past Easter, the landlord became concerned that the sugary decorations would attract pests and posed a hazard to other tenants.
When they asked her to take it down, the tenant refused, claiming she had the support of her neighbors.  When the landlord took it down for her, she responded by refusing to pay her next month’s rent.  She has since moved out.
The notoriety of this case quickly thrust it to the national level, and the tenant’s lawyer reports that she is now receiving calls to appear on talk shows, including the mock religious-conservative comedy show, The Colbert Report.  Her lawyer reports that she is likely to accept the invitation.
The landlord has filed suit to evict the tenant and to recover the unpaid rent.  The tenant asked for a jury trial to present her case that she was driven from the premises over her Easter decorations.  The judge in the case denied a request that the trial be expedited given that the tenant has moved out, but at this juncture, is allowing the case to proceed to a jury trial.  It is unknown at this time whether the court will award attorneys fees to the prevailing party.
What do you think?  Will the landlord win the case?  Leave your comment below.
American Apartment Owners Association offers discounts on products and services for landlords related to your real estate investment including REAL ESTATE FORMS, tenant debt collection, tenant background checks, insurance and financing. Find out more at joinaaoa.