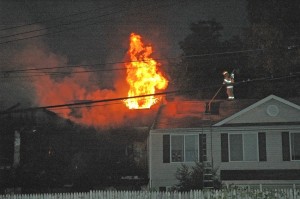 It has become all too common in the news: “Explosion Linked to Marijuana Lab”.

Tenants’ chemistry experiments have already caused millions of dollars worth of damage to homes and apartments, including those in Washington and Colorado since 2013 elections brought legalized marijuana.

There are many slang terms which generally refer to the consistency of the product — “wax”, “shatter”, “oil”–  being produced in make-shift labs. Although hash is also made using CO2 or simple water, a great deal of the modern manufacture is done using flammable liquids, the most popular being butane.

Butane, a colorless, odorless, and highly flammable gas, is heavier than air, so it pools low to the floor in closed areas. It is not converted into an inert form during manufacture; butane goes in one end and still comes out butane on the other end of the process. Butane is generally only converted to other gases through combustion, which can yield some harmful products such as nitrous oxides.

Inhaling too much butane can cause a variety of health issues including drowsiness, cardiac arrhythmia, and asphyxiation. If an excessive amount of butane in the air is somehow ignited, it can cause severe burns, fires or the explosions seen in the news. Yet, butane is easily accessible, available from sporting goods and hardware stores.

It only takes a butane to oxygen ratio of about 1.6-8.4% to cause an explosion. That means the gas builds quickly in small spaces.  Renters may not realize the many possible ignition sources, such as pilot lights or a simple refrigerator timer, or that the gas is simply too heavy to escape from an open window.

The problem is compounded in Washington and Colorado, states that have recently legalized marijuana use, because users now think they have a free license to do what they wish with cannabis. The landlord who is subject to federal law may not agree (or even know).

It’s important for landlords to know that even if marijuana use is legal in their state, federal law looks at hash-making as manufacturing, on the same lines as meth manufacturing. The state laws are vague at best, but one can naturally assume that medical, recreational or not, hash can only be legally manufactured in licensed facilities, not homes or apartments!

Today, it appears there’s a much higher likelihood of a seeing a hash lab due to the fact that the cultural acceptance of marijuana use by far exceeds the acceptance of meth. The only “up side” is that hash labs are less lethal than meth labs in one respect: the dwelling is not permanently poisoned from the reactants and landlords may not be out the costs of remediation. However, the concern is far more immediate –fire, explosion, or suffocation due to lack of oxygen in the air.

As amateur hash-making continues to gain in popularity, rental property owners need to stay on top of the trend and keep a vigilant eye on tenants. That means avoiding tenants with a criminal history, putting strong language in the lease, and inspecting rental properties regularly.