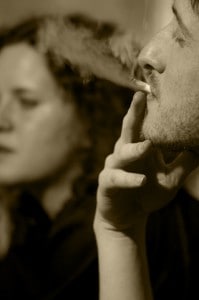 Santa Monica’s city council has backed down from an aggressive stance against smoking in apartments and condos.

While a proposed city ordinance which banned smoking in multifamily housing and subjected tenants to fines passed an initial vote, some council members had a change of heart, and the measure failed to get final approval.

Council members say the measure is now on hold.

A main concern for council members, according to a local report, is not banning cigarette smoking, but rather how the strict measure might impact a tenant’s rights to smoke pot under the state’s new medical marijuana law.

The proposed ordinance banned smoking — both cigarette and marijuana, in newly constructed units.  Tenants would have to identify themselves as either smoking or non-smoking, and those who smoked in non-smoking units could face fines as high as $500. After a smoking tenant moved out,  that unit would automatically be designated as non-smoking only.

The council faced criticism over the measure, including an unfavorable  LA Times editorial which criticized the move as an overreach of government, and one that unnecessarily criminalizes those who have what  the paper describes as a “vile and dangerous” habit.

Council members say they are tired of hearing complaints from tenants who get sick from secondhand smoke.

Read more
5 Biggest Mistakes...
After a long search, you finally bought the perfect property. You like the location. It’s all fixed...
Read more
As NY’s Eviction...
Hundreds of thousands of households across the state already owe back rent as a result of the pandemic,...
Read more
Renter Churn: Which...
Over the last 20 months, unprecedented shifts have led to new migration patterns. And while some...
Read more
Maryland...
Transit-oriented developments — high-density, mixed-use communities close to public transportation...
Read more
Gen-Z Will Drive...
Nearly half of Generation Z prefers single-family living to apartment living in young adulthood. The...
Read more
Rental inventory cut in...
It’s been a tumultuous 18 months in the New York City rentals market. Recently, as renter demand has...
Read more
Cities With Anti-Airbnb...
An unregulated short-term rental market has been proven to drive up the cost of big-city housing, but a...
Read more
New Jersey Landlords...
A new law bans New Jersey landlords from asking potential tenants about their criminal histories...