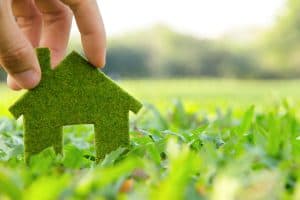 Eco-friendly features are cropping up on buildings around the country. In addition to green roofs and solar panels, private-public partnerships are increasingly building more efficient and cost-effective stormwater systems. And owners are reaping major monetary rewards for their efforts.

Green infrastructure is an umbrella term for anything that helps manage stormwater naturally and often includes rain gardens, green roofs, cisterns and rainwater recycling. Stormwater runoff, which often contains oil, grease and fertilizer, is among the most consistent pollutants of local waterways, according to the U.S. National Research Council. With more development in urban areas consisting of concrete and other impervious surfaces, stormwater often has no place to go other than down the local sewage channel. Without mitigation, the stormwater can overflow channels, flooding streets.

These additional amenities, such as green roofs, parks and water features, will often lead to rental increases. A 200-unit apartment complex at 1330 Boylston in Boston garnered an additional $300 to $500/month in rent for units that overlooked the green roof. The green roof cost $113K to build and the extra rent nets $120K/year, according to the ULI report.

Partnering with private developers creates a more affordable way for cities to address green infrastructure, which studies show is more cost-effective than implementing graywater infrastructure (where sewage mains and tunnels collect and treat stormwater and sewage before discharging). New York City estimates gray strategy would cost $6.8B compared to a green strategy that would cost $5.3B to implement. Burgess said she expects stormwater management and green infrastructure to become increasingly more prominent until one day it is part of business as usual.

In 2016, Gerling Edlen was able to harvest rainwater at its 180K SF Meier & Frank building in Portland, Oregon, that met 93% of the building’s non-potable water needs. The company saved more money than it paid the city. Annual savings equaled 107% on the building’s total annual water cost, according to Gerling Edlen Director of Sustainability Renee Loveland. The building owner also uses the stormwater system as a marketing tool with tenants. The renovation benefited from a local green investment fund grant.

This historic building, which is LEED Platinum certified, has an underground rainwater collection tank, a 12K SF green roof, a 112-kilowatt solar array and bioswales at grade.

The retail center Market at Colennade in Raleigh, North Carolina, uses three cisterns and a water reuse system, bioretention swales, an efficient irrigation system and a detention basin as part of its water management system. It is so efficient that of the 30.6 inches of rainfall captured in one year, only 0.6 inches flowed out of the system, according to Regency Centers Vice President of Investments Chris Widmayer.

Among the biggest benefits of this project was its ability to partner with anchor tenant Whole Foods, which uses the cistern to help market the grocery store’s green culture, Widmayer said.

For Burbank Water and Power, the green infrastructure helped attract younger employees to the company’s campus, Burgess said. The campus, which was renovated in 2000, operates on 100% recycled water, using green roofs that absorb 70% of rainwater and save the facility about $14K/year, according to ULI’s report.

Read more
NY Attorney General...
New York Attorney General Letitia James announced an agreement resolving her lawsuit against landlord...
Read more
How Thirdhand Smoke...
Going smoke-free in your rentals is important as the dangers of thirdhand smoke are not well-known as...
Read more
Hashing It Out: Indoor...
Indoor air quality for cannabis-related businesses is a key concern for business owners and landlords,...
Read more
Less Parking Could Mean...
Curtailing parking minimums represents a sweeping shift in American attitudes, swapping a glorified...
Read more
LEED Multifamily...
LEED rent premiums average around 3.1%. LEED-certified multifamily properties are consistently...
Read more
‘You Need More EV...
Southern California’s car culture is changing, and developers and architects are laying the...
Read more
Rental Listings With...
When US renters can compare the energy efficiency of houses or apartments, they are 21% more likely to...
Read more
4 Smart Ways to Reduce...
With the cost of living continuing to rise, people across the country are heavily thinking about...