Home·Property Management·What ROI Should You be Looking for When Flipping a House?

What ROI Should You be Looking for When Flipping a House?

Return on investment (ROI) is an important measure used by investors when analyzing and comparing the profit made by rehabbing and flipping houses. The basic ROI formula is relatively simple to calculate, although being sure all the correct numbers are included can be a challenge. Just as importantly, ROI is not the only number that should be considered when planning a house flip. But we’ll begin by looking at the basic ROI formula.

Total profit is the top line of the ratio (the numerator). This is the final net amount you receive as profit from a flip after selling the property and paying off any outstanding loans.

The bottom line of the ratio (denominator) includes all the cash and costs paid to purchase and rehab the property. Cash costs include things like materials, labor, and even the value of something that you might have bartered. If you paid all cash for the property, the entire purchase price is included. If you took out a loan, the down payment is included. Holding costs are things that cost money while you control the property but did not directly add to the rehab. Holding costs are things like property insurance, property taxes, loan payments made before repaying the loan in full, and closing costs on both the purchase and sale transactions. 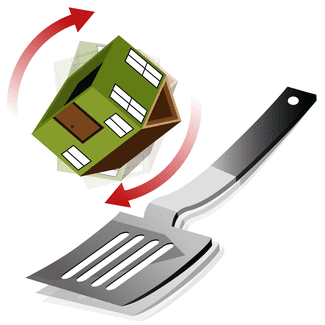 Making sure you capture all your expenses in the denominator is often the most difficult part of calculating a correct ROI. Some expenses can be significant and easy to capture like car milage for multiple trips to hardware stores. Others can be forgotten like postage and file folders. The ROI formula is simple to calculate. Making sure it is correct requires good bookkeeping.

When getting into the ROI that you should expect to make on a flip, it is also good to consider the time value of money. ROI does not factor in time. When figuring out the potential value of a flip, it’s important to know how much money it will recoup over a certain time period. For example, if you are trying to choose between two houses to invest in, where House A offers an ROI of 30%, and House B offers a higher ROI of 40%, you may be inclined to choose House B – after all, that’s a better ROI. However, if Company A offers a 30% ROI over two months, and House B offers a 40% rate over seven months, then House A would be a smarter financial decision – which is where the ROI formula falls short. The reason is because you could do two or three flips of House A in the same time as one flip of House B.

Recent statistics show a typical house-flipping profit was $73,766, according to a report from ATTOM Data Solutions. But that is average. Some flips certainly lost money, which brings the average down. Other flips make huge profits that can be as high as $500,000 or more. High-end houses bring the average up, but these are pretty rare, and the houses are so expensive that they can be difficult to sell on the flip side. Reliable and consistent flips are best in middle to upper-middle neighborhoods. This is where profits can be expected in the $40,000 to $70,000 range… depending on several variables.

Although middle to upper-middle houses don’t make as big of profits (ROI) as ultra-high-end houses, these do sell very fast. You can expect to sell a quality rehabbed house in the middle price range a week after it is finished. Then you are on to your next flip and your next handsome profit. An ultra-high-end house can easily take a year to sell. At this level, buyers want everything to their exact specifications. They are not interested in what you thought they would want. If you have the money, you can go on vacation for a year until it’s time to start the next rehab project. Of course, that entire year, you’ll be paying the mortgage on that ultra-high-end house along with the taxes, insurance, etc. Ultimately, the most money is made flipping middle to upper-middle houses.

Flipping by the Numbers. Typically, flipping is defined as buying and selling within six months. RealtyTrac numbers show that about 157,000 single-family homes are flipped each year. Calculating the final selling price from the original purchase price reveals that the average flip gross profit is $73,766. However, that doesn’t account for the cost of rehabbing the house and other expenses.

Here is why time is important. A 6-month flip would generate an average monthly profit of $8,130. If you can reduce the flip time to 4 months, the monthly profit goes up to $12,200. Neither are numbers that will make you insanely wealthy but it’s still a decent living wage. Once you get the rehab down to two months, the monthly profit becomes $24,400. Now you are talking about some good money. Your goal should be to have at least four or five houses in work at all times. That’s when you can start earning upwards of $48,800 every month.

Your six-figure income. So, if you make it your goal to have four or five houses in work every month it will generate $48,800 every month, your annual profit becomes a WHOPPING $585,600 annually. Even at half that pace, the $24,400 per month totals up to a GENEROUS $292,800 over the year. Even at the much slower pace of only flipping one house every four months brings in SIX FIGURES at $146,400.

An ROI of about 28% is very reasonable. But the real money in house flipping is made with multiple flips per year.