Home·Property Management·What Is a Duplex Home?

What Is a Duplex Home?

More importantly, what do you need to know before buying a duplex house?

Duplex homes offer interesting potential for those looking to purchase a home or investment property. But what exactly qualifies as a duplex home, and is owning one as straightforward as owning a single-household residence? Two experts weigh in.

Definition of a Duplex House

A duplex house is essentially a property where two households can live separately. 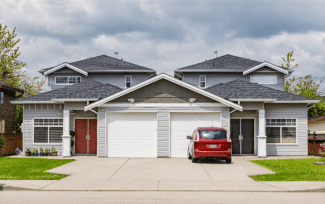 “A duplex is a single house or single building that has two separate living areas within the same structure,” says Ryan David, the owner of We Buy Houses In Pennsylvania. “For example, think of a large single-family home cut in half, either vertically or horizontally, that would allow different tenants to live in a separate apartment under one roof.”

Another way to put it is to say that, in duplexes, some aspect of the two spaces is shared.

“A duplex home consists of two separate units that share a common element, like a wall, floor, or roof,” says Mallory Micetich, a home care expert at Angi. “Each unit has its own entrance but may share other amenities, such as yards and garages.”

Sometimes, a duplex is made up of two independent properties, particularly in urban or suburban areas. In these situations, the properties may have different owners, and the structures function as townhouses: independent structures with a shared wall (and, sometimes, shared parking or other features). In these cases, each owner owns part of the duplex, not the whole thing. In many situations, though, a duplex is owned by one person, and the separate units can be next to each other or stacked, with the ground floor serving as one unit and the upper floor serving as another.

Many people are interested in duplexes because they can be a straightforward element of a multi-generational family living situation.

“For example, an aunt and uncle on one side and parents on the other,” David says.

A duplex is zoned for multiple families, which means there is adequate parking, plumbing, and space (in most areas). In most cases, the property is comparable in price to that of a single-family home, making it a bargain buy in many ways.

A common reason for purchasing a duplex is to live in one half of the property while renting out the other.

“When an owner does this, it’s commonly referred to as ‘house hacking,'” David says. “This offers exceptional value to the owner, because they can essentially live in the home for free, especially if the rent from the other half covers their mortgage and utilities.”

In some cases, a buyer might purchase a duplex and rent both halves out, acting as a landlord.

Micetich says some buyers live on one side of a duplex but use the other half for guests. Whatever the case might be, duplexes are often a bargain.

“They’re usually more affordable than traditional homes, so you can enjoy most of the luxuries of owning a home at a lower price point,” Micetich says.

Should You Purchase a Duplex?

If you’re looking into purchasing a complete duplex, you’ll want to first familiarize yourself with local ordinances.

“The rules on duplexes in most areas fall on the local municipality,” David says. “For example, zoning, code enforcement, etc., would fall under the local city or governing authority.”

Parking is another major consideration. Be sure that, if you’re renting the property out, tenants have access to their own parking. If you don’t, tenants might need to use street parking, so you’ll want to make sure that’s also available. In either case, it can affect what you’re able to rent the unit out for.

“If there is only street parking, that will lower the rental income the owner can charge,” David says. “Or if there’s only enough parking for one tenant, naturally the tenant that parks on the street will pay lower rent.”

And in either case, you’ll want to make sure you’ve spent a lot of time doing the math and making sure there’s a demand for a rental property locally.

“Anyone looking to purchase a duplex must also know the amount that is received from the tenant’s rent will be able to pay off the mortgage debt as well as any utilities and other expenses,” David says. “The number one objective of an investment property is to make a profit for the owner, so it’s essential the two rents from each apartment exceed the monthly expenses to keep up with operation expenses.”

David also points out that privacy is often a point of tension in duplex homes, so take a close look at the availability of shared spaces such as garages, basements, and attics.

“To alleviate any liability concerns, a wise owner will make sure to separate any common space shared between an attic or basement,” he says. “The more privacy each tenant has, the better off everyone will be.”

What to Consider Before Buying a Duplex

If you’re wondering about the pitfalls of owning a duplex, consider privacy first, particularly if you plan to live in one half of the property.

“Before you purchase a duplex unit, consider how sharing a wall or roof will affect your everyday life,” Micetich says. “For example, you may have to deal with a neighbor who is noisy or unwilling to help with yard work.”

On top of the close quarters, keep in mind that a duplex means twice the amount of upkeep.

“You will have double the kitchens, bathrooms, and square footage to manage and maintain,” Micetich says.

If you rent out part or all of your duplex and are selling it to another person who plans to rent it out, too, you’ll want to be able to demonstrate that the property can generate an income.

“The higher the rents coming in each month, the more profit there will be for the owner,” David says. “More money equals greater desirability. Keeping the duplex in good condition, clean, and well-maintained will also help the property to retain and add to its value.”