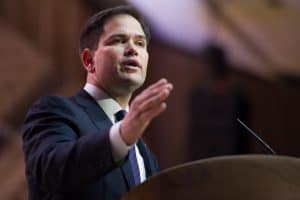 Rubio’s legislation, co-sponsored by Sen. Rick Scott, would require HUD to publicly post the results of its inspections to show what metropolitan areas and states have the worst scores.

The bill would establish a process for increasing rental rates when a new owner purchases an apartment building that failing HUD’s inspections under the prior ownership and needs investment to bring it up to standards.

The proposed changes would apply nationwide but has arisen from cases in Jacksonville that have drawn criticism from local and federal leaders.

“HUD’s lack of oversight is unacceptable and is failing vulnerable residents who deserve safe and sanitary living conditions,” Rubio said about his bill. “It’s time for HUD to hold slumlord landlords accountable for their despicable actions.”

“My bill would put a stop to HUD’s pattern of negligence by ensuring that inspections take place according to federal timelines by law and to hold incompetent employees accountable for failing to do their job,” he said.

HUD officials have said the COVID-19 pandemic disrupted the schedule for conducting investigations.

Rubio previously filed a version of the bill in 2019 in response to problems at an apartment called Eureka Garden at the time. Under pressure from Rubio and other federal officials along with Jacksonville officials, Global Ministries Foundation gave up ownership of Eureka Garden, now called Valencia Way.

Rubio’s office turned its attention this year on three other Jacksonville apartment complexes after reporting by WJXT-Channel 4 on conditions at Hilltop Village Apartments, Eastside Terrace Apartments and Eastside Gardens Apartments.

Hilltop Village Apartments, managed by Cambridge Management Inc., has been working with HUD to correct problems identified in inspections.

Rubio’s staff members have made their own site visits to the apartment complexes and his office has highlighted the lack of annual inspections for apartment complexes that get federal contracts so they can provide affordable housing to residents based on household incomes of tenants.

He said in the case of Hilltop Village Apartments, it had a REAC inspection in December 2015 but did not get another HUD review until this May after news reports exposed the problems and he contacted HUD.

Rubio’s bill is similar to what he filed in 2019 but adds requirements for enforcement of violations, establishes timelines for inspections tied to the findings of inspections, and adds the rental adjustment language for rehabilitating neglected property when a new owner steps in to make changes.

The bill would require HUD to publicly release an annual report showing all properties that received a REAC score of less than 65 out of 100. The threshold to pass inspection is a score of at least 60.