Renters’ Flight To the Suburbs Has Big Implications For Climate Change

The way that we organize our cities has a profound impact on our carbon footprints. 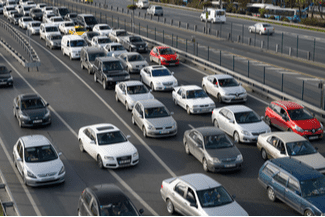 As much of the US boils under an oppressive heat wave, discussions about climate change have yet again moved to the forefront. But despite rising concerns about climate impact, Americans appear to be increasingly opting for suburban “fringe” counties, where the average household carbon footprint is 18 percent higher than in more central regions.

“Housing is inextricably linked to the climate, and the way that we organize our cities has a profound impact on our carbon footprints. In densely populated urban areas – in which individuals occupy less space and are less reliant on cars – per-capita emissions are significantly lower than they are in the surrounding suburbs, where cars are typically the dominant commute mode and residents often bear long drives in traffic to access jobs in the city,” researchers from Apartment List note in a new analysis. “Given this dynamic, it is crucial that we grow our nation’s population centers in ways that prioritize dense, transit-oriented development. Unfortunately, the pandemic appears to be pushing us in the opposite direction.”

They point to the rise of remote work, which has made proximity to the office less of a priority, and rising rents and home prices across the board as primary drivers of this trend.

“Demand for rentals has been strongest in the suburbs of large metros, with the potential to drive precisely the type of sprawl that is at odds with progress on emissions,” the report notes. By way of example, the average household carbon footprint in Manhattan, or New York County, is 32.6 tCO2e/yr, while the average footprint is 68 percent greater (54.1 tCO2e/yr) in fringe counties of New York City.

From 2019 to 2021, the fringe counties of large metros saw population increases of 2.4 percent, while central counties grew by just 0.1 percent. What’s more, the counties encompassing some of the densest cities in the US lost population, including San Francisco (-7.5 percent), Washington, D.C., (-5.1 percent), and Boston (-4.1 percent).

Meanwhile, rents in fringe counties ticked up by 23 percent, compared to 18 percent in central counties between the onset of the pandemic and this May.

Rental data in those regions underscore the need for a greater supply of affordable apartments and homes for sale, according to the Apartment List team.

“This shift toward the suburbs has negative implications for the climate, as suburban households have significantly higher carbon footprints, on average, than their counterparts in the urban core. And while remote work might eliminate some commutes, it could also push some part-time commuters to move even further from their jobs,” they write. “Crucially, this flight to the further reaches of large metros is not driven purely by preference, but largely by affordability – a lack of new construction has made housing in the urban core prohibitively expensive in many cases…With housing affordability having reached crisis levels across the country, it’s crucial that we not only grow our nation’s housing supply, but do so in a sustainable way.”