Q: Upstairs, in the wall between the bathroom and the master bedroom, there is a thumping noise throughout the night and it’s driving my wife and me crazy. It sounds like a dripping noise initially, but I discovered it is the 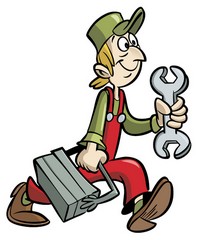 black plastic drainpipe in the wall.

I traced it to the crawl space and can feel the pipe thump and vibrate.

Plumbers have told me that the pipe is expanding and settling as it cools. It’s loudest after a hot shower and tapers off, but it still goes on 12 hours later.

This noise started six months ago. I have lived in the house for 10 years.

Perhaps coincidently and probably unrelated, about the same time the noise started the copper hot water pipe in the crawl space sprang a leak and had to be patched by a plumber, who, my wife said, “was banging hard on the pipes down there for some reason.”

A: We’re impressed that you are able to narrow the source of the noise to the drain, waste and ventilation system. Because you’re able to access some of the piping, with some poking around in the attic and crawl space and a little luck, you might be able to deep-six the noise of the groaning pipes.

First, we agree with the plumbers. The source of the noise is probably your plastic pipes expanding and contracting with changes in temperature. Your system is constructed from ABS, which is an acronym for acrylonitrile butadiene styrene. This thermo plastic has good resistance to impact, heat and chemicals. ABS will change shape with changes in temperature, but not the way you’d think. It doesn’t get wider or lose its shape. It gets longer with heat and shorter with cold.

The noise you hear is the pipes rubbing on the wood framing or other rigid supports as they expand and contract. Plumbers route drain, waste and vent pipes by drilling holes for the pipes in the walls and floor framing. If the fit is too tight, squeaks can occur as the pipes move. Since the noise began after the leak repair, it’s reasonable to presume that there is some connection between the two events.

Repeat the procedure where you have access to the cleanout. If the pipe seems to bind at any of these locations, it could well be the source of the problem.

In the crawl space, look for evidence that the plumber may have tried to restrict the movement of the pipes with wedges or other items. If you find areas where the pipe binds, try to loosen them. If the binding seems to be in the framing, try to widen the hole with a chisel. Be gentle and work slowly so you don’t disturb the fittings where the pipes connect to the fixtures.

If there are wedges placed in the holes that bind the pipes, remove them. Finally, place a little lubricant, like petroleum jelly, on the pipes and move them in the holes. A little grease may be all you need to solve the problem.
Copyright 2009 Bill and Kevin Burnett