Should Landlords Flock to Phoenix? 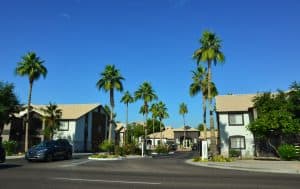 New York, San Francisco, Boston — these are all names we expect on the country’s list of highest rents. But this month? A surprising smaller town joined the mix.

According to rental platform Zumper, little Scottsdale, Arizona, is now the No. 10 most expensive place to be a renter. The average rent on a one-bedroom in this Phoenix-area suburb now clocks in at a whopping $1,850 — just under rents in Miami, Los Angeles, and San Diego.

Are you on the hunt for a new rental property? Should Scottsdale be on your radar? Let’s dive in.

Rising rents in the Phoenix area

Rents in the Phoenix region have been on a tear in recent months, notching a 22.3% increase since just last September. In Scottsdale, specifically, rents have increased 5.1% since August and are now up 23% compared to last year.

Scottsdale isn’t the only suburb in the area to see steep upticks, either. Nearby Mesa, Glendale, and Gilbert have seen significant increases, too. In fact, in Gilbert, rents on one-bedroom properties have jumped nearly 25% compared to last year.

According to the report, the bump is the result of a perfect storm of sorts, one marked by:

Altogether, “This has priced a lot of would-be buyers out of the home sales market, and others simply don’t want to deal with the intense competition of bidding on a house with numerous other potential buyers,” Zumper’s report reads. “What that means is a lot of people who would normally be buying are still renting. These renters have grown in numbers over time and have gradually put upward pressure on rent prices.”

Clearly, rising rents are good news for landlords. But remember: While Phoenix may be a great place to have a rental property right now, it’s not an easy place to buy one. With inventory down and prices (and competition) up, finding a low-cost, high-ROI investment home is an uphill battle.

If you do opt to invest in Phoenix, make sure you work with a tuned-in local real estate agent, and be prepared to pull out all the stops. Waiving contingencies or offering all cash can help.

Read more
Spending Money to Make...
It’s a fact – in order to get the best rents from the best tenants, your property needs to...
Read more
Regal Acquisitions’...
A building in Harlem — formerly the site of iconic jazz club Lenox Lounge — went public on...
Read more
Stringent Rent Control...
A stringent 3 percent rent control measure has passed in St. Paul, Minn., and Minneapolis voters also...
Read more
Zombie properties to...
So-called “zombie properties”, or homes that sit vacant due to foreclosure, have become difficult...
Read more
Downtown LA busiest in...
Report: Gentrification trend survives pandemic, Hollywood makes top 10 A recent report offers a new...
Read more
Lennar To Build...
The Austin community is scheduled to break ground in 2022. Lennar, one of the nation’s leading...
Read more
Mom-and-Pop Landlords...
When the coronavirus outbreak exploded and millions of jobs were shed overnight, it became clear that...
Read more
4 Ways to Make Sure...
These four tips ensure that homeowners and residential real estate investors not only think about...