No Loud Music. No Smoking. No Guns. Can NYC Landlords Ban Firearms? 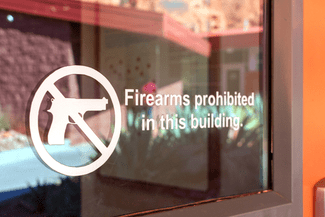 The U.S. Supreme Court’s conservative majority struck down New York’s strict concealed carry limits last week, opening the door for gun-owners to get permits and strap up in all sorts of public places. Gov. Kathy Hochul has called state lawmakers back to Albany for an extraordinary session on Thursday to pass new gun safety legislation in response to the ruling, which she called “reckless and reprehensible.”

Since 1911, New York has restricted who can legally possess a firearm in public by requiring concealed-carry applicants to show “proper cause” for why they deserve a license. An appellate court upheld those limits in a 1980 decision that makes would-be permit-holders demonstrate a “special need for self-protection distinguishable from that of the general community.” Two permit applicants in upstate New York challenged that so-called “proper cause” restriction in court, and, after a series of appeals, the Supreme Court agreed to consider the case.

Probably, according to several tenant and landlord lawyers, defense attorneys who specialize in gun cases and constitutional scholars.

Experts who spoke with City Limits say owners can ban guns as a condition of a lease because they are imposing restrictions on their own private property, though some said the high court could someday determine that the Second Amendment—at least as it is interpreted by the six justices on the bench who ruled in favor of gun enthusiasts—could supersede those ownership rights.

“A landlord is just like any business owner—a restaurateur, a movie theater owner, an amusement park,” said Andrew Lieb, a New York-based constitutional lawyer and real estate attorney. “The Second Amendment is only about government restrictions on your rights.”

Lieb said landlords can add a “no guns” provision to leases as long as the same rules apply to everyone in a multi-unit building. “I’m as confident in that statement as I am that there is no alien in my room right now,” he added. (Then again, a House Intelligence Committee recently held a hearing on UFOs. We live in interesting times).

Lieb said it may not be possible for a property owner to actually enforce a “no guns” rule, but the lease language could protect them from liability if someone is killed or injured by a renter or guest with a gun.

“I would think that it becomes standard in leases across New York City and elsewhere,” Lieb said. “The reason you would do it is because of liability and indemnification…It’s because of money, not because of principle.”

In states outside New York, businesses commonly prohibit guns and it’s easy to spot stickers on storefronts informing patrons that they have to leave their weapons at home. Attorney Jerold Levine, who handles gun licensing cases in New York, said he thinks lawmakers will codify rules allowing private property owners to set clear limits on gun possession and come down hard on violators. The same could happen in apartment buildings.

“One of the first things New York is going to do is say private property owners are permitted to put restrictions on the use of their property,” Levine said. “They will enact criminal statutes that allow people to be arrested for violating those private property restrictions.”

There is some local precedent for a “no guns” lease rule. In 2018, a large New Jersey-based real estate firm banned guns in a Newark apartment complex. The company, RPM Development Group, did not immediately respond to a voicemail and email left on Thursday.

It is an issue that some states have dealt with in explicit terms. Under Minnesota law, for example, landlords cannot ban their tenants from possessing guns. In Tennessee, property rights trump the Second Amendment: landlords can prohibit firearms.

In a state like New York, where no such legislation exists, Ellen Davidson, a housing attorney at the Legal Aid Society, said landlords’ private property rights likely give them the power to ban guns in their buildings. “One would think that since the Supreme Court sees property owners as business people, that a landlord that has such a rule would be OK,” she said.

But Davidson cautioned that the lease language could be used as a pretext for eviction. “And like anything that can be used as grounds for an eviction, the people these things hurt the most are low-income people of color,” she added.

While private property owners may be able to ban guns, public housing is a different story. A federal court in 2019 overturned a public housing authority’s gun ban in East St. Louis, Illinois, and some states have also moved to prevent landlords from banning guns in apartments subsidized by the federal Section 8 program.

The NYCHA lease agreement does not mention firearms and residents can legally possess a gun in their unit, though state law has made that inconvenient because few can legally carry in public. “NYCHA residents, like all New Yorkers, are bound by New York State law,” said a NYCHA spokesperson.

Across New York, local officials had granted around 54,200 concealed-carry permits in 2018 and 2019, according to documents the state submitted to the Supreme Court. In New York City, the NYPD determines who is eligible for a concealed carry license and by 2011, only about 4,000 New York City residents had satisfied the requirements, according to documents reviewed by the New York Times. Most of the permit-holders are ex-cops and security guards with some notable exceptions, like far-right TV host Sean Hannity. 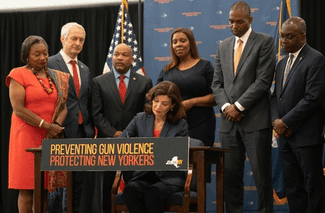 In a decision authored by Justice Clarence Thomas, the Supreme Court ruled that New York’s “proper cause” rule that requires applicants to justify the need for a concealed-carry permit violates the Constitution by preventing “law-abiding citizens with ordinary self-defense needs from exercising their Second Amendment right to keep and bear arms in public for self-defense.”

Levine, the New York-based attorney, said he is not sure what would happen if a case where a tenant challenges a landlord’s gun ban ever made it to the Supreme Court. “I don’t know how well that would hold up if it’s challenged,” he said, before describing a counter-argument. “If you do want to have a gun, you can move somewhere else.”

But Arizona-based attorney Denny Dobbins thinks such a case will reach the court down the road. Dobbins has frequently commented on gun bans in rental buildings and said Second Amendment interpretations may some day supersede private property rights in an apartment because, unlike other business premises, the space is under the tenant’s control.

“A bar owner could say, ‘No guns here,’ but in an apartment, though it’s owned by someone else, it’s controlled by you,” said Dobbins, who serves as counsel to the background check firm CrimShield. “If the rule and regulation is ‘it’s controlled by you,’ then it may be a violation of your Second Amendment right.”

Still, landlords can continue banning guns until the Supreme Court says otherwise, Dobbins said in a lengthy interview in the February issue of Rental Housing Journal—though he said he believes gun owners should be considered a “protected class.”

“The private landlord can make that decision because there hasn’t been a case yet that draws the Second Amendment into the private-landlord decision-making process on the issue, as has happened with Fair Housing issues like race, color, national origin, familial status, religion, gender, age, military status and Americans with disabilities,” he said.

The notion that “gun owner” could be considered a protected class on par with people who have historically been targets of racism, sexism, xenophobia and other forms of discrimination may come as a shock to most New Yorkers. But then again, so do a lot of decisions coming down from a far-right court.

“We are reviewing the impact this decision will have on housing, particularly as it pertains to public areas in our members’ buildings,” said CHIP Executive Director Jay Martin. “We also stand ready to work with elected officials to craft new policies that protect the safety of renters.”

(CHIP, meanwhile, may have another Supreme Court case to deal with: They are one of the plaintiffs challenging rent stabilization laws in a case they hope to bring before the nine justices).

“While we’re still analyzing the decision, we can say with certainty this decision has made every single one of us less safe from gun violence,” Adams said at a press conference immediately following the decision.

At a separate press conference, Hochul said that the Supreme Court ruling “could place millions of New Yorkers in harm’s way” and called a special legislative session, likely to establish “sensitive locations” where local authorities can limit guns.

The New York City Council has proposed state legislation that would classify any place with more than 10,000 people per square mile as a “sensitive location,” effectively covering the five boroughs.

Earlier this month, Hochul signed a legislative package to bolster the state’s Red Flag Laws and to prohibit people under 21 from purchasing semiautomatic weapons—like the one used by an 18-year-old white supremacist during a racist mass shooting in Buffalo in May.

Nassau County State Sen. Kevin Thomas, who sponsored the bill to raise the age on semiautomatic weapon purchases, said lawmakers will craft measures that adhere to the court ruling while imposing some restrictions.

“We’re going to look at all the concerns here before we write this bill so we get this right and so that it does not get overturned,” Thomas said. “This is the wrong decision at the wrong time … and basing their entire decision on the history of the Second Amendment is just a joke.”

The full impact of the Supreme Court ruling, including its impact on violent crime and public safety, will unfold in the coming months, said defense attorney Jeremy Saland, who represents people charged with gun possession in New York, including airport visitors and tourists unaware of the Empire State’s strict gun laws.

The ruling does not mean Long Island City will immediately become Dodge City, but it could portend the erosion of other gun restrictions, Saland said.

“It’s not a carte blanche unilateral endorsement that one can possess a firearm anywhere anytime in any capacity without the right permits or licensure,” said Saland, a former Manhattan prosecutor. “But I think it will raise concerns to some that this is sort of the drizzle before the rain shower of laws that may be challenged and changed by the conservative majority and their liberal reading of the Second Amendment.”

A few minutes after speaking with City Limits on Thursday morning, Saland called back.

He had just talked with someone wondering how they could apply for a concealed-carry permit.