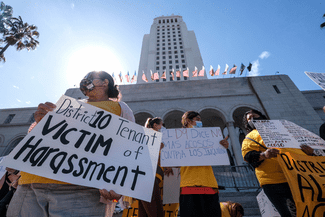 When Araceli Guerra moved into her small, two-bedroom apartment in Concord three years ago, it wasn’t in the best shape.

There were cockroaches and mice. Some of the kitchen cabinets were missing doors. Still, Guerra was having trouble finding somewhere she could afford and was running out of time on her lease.

“We were almost homeless,” she said in Spanish. “And the landlord didn’t ask for a security deposit or anything like that.”

So, she and her five children moved in. The landlord would periodically bring someone to fumigate the building, but it didn’t seem to matter.

“The cockroaches, the mice,” she said, “they never go.”

Then, about three months ago, Guerra said things got really bad. Some new tenants moved in. They drink a lot. And Guerra said they use the alley behind the building to urinate, right below her apartment, which she said brought in even more vermin.

So last month, Guerra called the city’s building inspector. A few days later, she got an eviction notice. She thinks it’s retaliation. KQED could not reach Guerra’s landlord for comment.

Now, Guerra says she’s getting headaches from the stress of thinking about where she and her family are going to live.

She may have new recourse under new tenant anti-harassment rules the Concord City Council approved Tuesday. The city is now the latest in a handful of cities across California to adopt such policies since the start of the pandemic.

Los Angeles, Long Beach and Richmond all have approved new rules to stop landlords from harassing their tenants. And councilmembers in Antioch and Chula Vista are considering similar legislation.

Tenants’ rights organizations say the pandemic fueled an increase in calls about landlord harassment. They say they saw landlords shutting off utilities, threatening to call Immigration and Customs Enforcement, changing the locks, or taking other actions meant to intimidate tenants into leaving.

Shanti Singh, a spokesperson for the statewide organization Tenants Together, said the group’s tenant hotline was overwhelmed with calls during the pandemic – many of them complaints about alleged harassment.

“Harassment really, really went up during COVID from the beginning,” Singh said, “but especially as the rent relief program sort of wore on and people were waiting.”

She said the slow rollout of rent relief, coupled with the eviction moratorium, meant frustrated landlords were looking for other ways to get their tenants to pay or leave.

But Singh said another reason more tenants in cities like Concord are pushing for these proposals is that, over the past decade, more people of color and especially lower-income renters have been moving away from expensive coastal cities in search of housing they can afford.

“As people get pushed out further and further, often inland,” she said, “they’re moving to places where they don’t have any protections, and they’re trying to organize in those places.”

Landlord advocates have been pushing back against these new local policies, saying they’re unnecessary since the state already has laws that prohibit landlords from harassing their tenants. Joshua Howard, with the California Apartment Association, criticized the local policies for being overly broad.

“What these ordinances do is they invite excessive penalties on landlords for making what could be considered an innocent mistake,” he said.

The local ordinances expand the definition of what can be considered harassment beyond what’s already allowed in state law. In Concord, that includes behaviors like failing to accept rent payments, failing to make timely repairs, or entering the rental unit outside business hours unless requested to do so by the tenant.

“So not only could the landlord be sued under state law, but they could also be sued now under the local law,” Howard said, blasting these policies as excessively punitive. “It creates a double penalty and a second mechanism to sue the owner and impose some significant fines, fees and penalties.”

Tenant organizers say those penalties are necessary to send a strong message to landlords and property managers that harassment won’t be tolerated.

“It really does empower tenants,” Singh said. “What they know instinctively is that this [behavior] is wrong, but for it to be wrong legally actually gives them a lot of strength.”