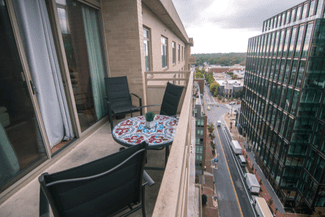 Transit-oriented developments — high-density, mixed-use communities close to public transportation — are becoming increasingly popular. Meant to combine the best elements of urban and suburban living, they are lauded for benefits such as reducing residents’ dependence on driving, shrinking a region’s carbon footprint and stimulating the local economy.

TODs range from single buildings to complex, multi-use developments with live-work-play amenities such as the new Metro Centre in Owings Mills, Maryland.

Communities have long sprung up wherever there is easy access to a commuter rail line or interstate highway exit close to a big city. But the idea of creating a purpose-built, mixed-use and nearly self-sustaining community — with easy access to other locations and which doesn’t require driving — might have seemed odd to an earlier generation of builders.

“Years ago, we would build apartment developments in suburbia and office buildings in suburbia or in the city, but not both together,” said Howard Brown, president, CEO and owner of David S. Brown Enterprises Ltd.

Brown is the second-generation leader of the development firm founded in 1933 and headquartered in Owings Mills. For much of his company’s history, someone who wanted to get from one of its apartment buildings to one of its office developments would have needed to drive.

But while their parents might have been enamored with the car-focused model of suburban living, many people today prefer to live and work in a place that values pedestrians over vehicles.

“I think people today are not looking to drive any more than they have to,” Brown said. “They want to be able to live and work in the same place and be able to walk everywhere.”

Brown’s company is banking on that trend as Metro Centre, its 46-acre mixed-use development in Owings Mills, takes shape in Maryland’s 825,000-person Baltimore County. Metro Centre is the county’s only TOD, and for inspiration, Brown looked not to other suburban communities, but to the best elements of vibrant urban neighborhoods.

“We’re basically replicating SoHo or Chelsea — you know, pockets in New York City where people can stay in their neighborhood whether for work or play,” he said. “In a TOD, you can walk, bike and you can just go downstairs from your apartment to go to a restaurant and you don’t have to get in the car.”

Metro Centre is being built around a Baltimore Metro SubwayLink station, which is used by 1.3 million riders annually. That ridership is likely to grow as more people move to or work at the new TOD, but Metro Centre also has its own ramp from Interstate 795, allowing easy access to Baltimore, Washington, D.C., and Pennsylvania for those who still prefer to drive.

The development’s slogan is “Live Here, Work Here, Go Places,” a play on the live-work-play concept that reflects the mixed-use and transit-oriented nature of the project. Although there are many places for people to go in Metro Centre, Brown said, the proximity of the Metro station and interstate means they can easily reach retail and other amenities in the wider region.

Kevin Keane, senior vice president of office leasing for David S. Brown, envisions a community where residents can walk out of their apartment, meet a client for breakfast at one of Metro Centre’s restaurants, walk across the street to the office, take a colleague to lunch and then later on meet their spouse and kids at the library for storytime, or take a continuing education class at the community college — all without ever leaving the TOD.

The plan is for Metro Centre to eventually include 1,700 residential units, 300K SF of retail and 1.5M SF of office space, as well as a full-service Marriott Hotel scheduled to open this winter. At the center of the TOD is a six-story, 120K SF building that houses the largest branch of the Baltimore County Public Library and the Community College of Baltimore County. It sits on a public square that features green space that can be used for neighborhood and community events, farmers markets, outdoor workspace, picnics and exercise.

Keane noted that the two educational institutions not only serve residents, but they also act as resources for companies that relocate to Metro Centre. Already, he said, office tenants are taking advantage of meeting spaces and other resources at the library and community college.

“One of our tenants recently utilized the college space for a series of large group trainings,” he said. “In their former office location in a nearby suburb, they had to book a hotel meeting room off-site and have everyone drive there. At Metro Centre, it is a simple matter of everyone walking outside to the building next door.”

That synergy is intentional, Keane said, because in a development like Metro Centre, no single building is meant to operate in a vacuum.

“Metro Centre is all about a dynamic mix of uses combined in a walkable format,” he said. “Each component complements the others and together they all contribute to a sense of place and community.”

The residential portion of Metro Centre is about one-third completed, and Brown said the project will keep his company busy over the next several years. Future David S. Brown projects might not be as grand as Metro Centre, but they are likely to echo the TOD’s mixed-use ethos.

“My focus in the last number of years has been on mixed-use projects,” Brown said. “I don’t think that I would want to build an apartment building or an office building by itself today. Mixed-use is primarily the direction that we’re going in today.”