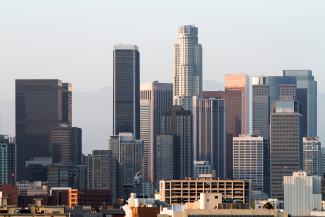 Henry Manoucheri, the chief executive of Universe Holdings — a Century City based multifamily investment firm with 3,000 units in Southern California — estimates that more than 300 of his tenants owe back rent. A lot of it. As in two years’ worth, in many cases.

“The fact that they have extended (Los Angeles County’s eviction moratorium) has created a big disaster for many owners,” he said.

Manoucheri is caught in the same dilemma as many landlords who aren’t collecting rent from their tenants but can’t evict them because of a Los Angeles County-imposed moratorium that recently was extended into next year.

“Eviction bans such as the county’s merely encourage unscrupulous renters to skip paying rent with past-due rental debts continually piling up that in most instances will never be repaid,” said Jeffrey Faller, president of Apartment Owners Association of California Inc. “Moratoriums on evictions are unfair for those residents who have worked hard and sacrificed to pay their rent.”

The situation has gone on for so long – more than 700 days, according to Faller – that his organization and the Apartment Association of Greater Los Angeles have filed a joint lawsuit in Los Angeles County Superior Court seeking a preliminary injunction against the moratorium. The legal move announced March 8 follows the county’s Jan. 25 extension of the temporary Covid-19 related residential eviction protections for many renters until June 30 of next year.

The eviction moratorium, which covers Los Angeles County, was originally instituted in March 2020 to help protect tenants impacted health-wise or financially by Covid. If tenants declared to have been affected by Covid — even without providing any proof — they could defer paying rent and could not be legally evicted by landlords. Technically, renters are supposed to repay past rent eventually. But even if renters do pay, it could be years before landlords see any of that money.

In their joint complaint, the organizations declared that there is no rational basis for extending the eviction moratorium and creating what is, in effect, a “rent holiday” that has not only allowed renters to take advantage of the crisis situation and remain housed without paying rent for up to two years, but which has now been extended for a third year.

Daniel Yukelson, executive director of the Apartment Association, doesn’t understand the point of extending the eviction moratorium further when the country appears to have pulled out of the pandemic crisis for many weeks now.

“Two years into this pandemic, with state and federal eviction bans now having expired long ago, with business back to normal, and following a major event like the Super Bowl here in the Los Angeles area, it is nonsensical for the county to continue to impose its eviction ban,” he said. He believes no other business sector has been singled out and forced to provide so much service for free.

The two landlord organizations have asserted that the county’s moratorium has come at the expense of landlords, particularly the small business, “mom and pop” variety who make up most of the rental property owners in the L.A. market.

“Landlords in the county continue to suffer under the county’s ordinance with no relief or assistance of any kind offered to help those landlords who are clearly struggling financially,” Faller of the apartment owners group said. “Despite the availability of state rental assistance funds, many landlords are finding that tenants merely do not qualify for relief, approvals and funding are slow to nonexistent, and many tenants are not cooperative or have moved on. It’s a big problem and a major financial burden that has been placed on the backs of small owners.”

Various property owners told the Business Journal spoke that California’s Housing is Key rent relief program, designed to help renters pay their landlords, is a systemic fail, as Fallor said, all but ensuring that landlords cannot collect rent or evict bad tenants. What’s more, Housing is Key program and others like it created work for landlords.

“We had to work very hard in the last two years creating a team working five days a week to get these financial packages,” Manoucheri said. “We never worked that hard before.

Many landlords tell horror stories. Ellen Becker is one. She rented out a single-family house in Cheviot Hills that used to be her family home. In March 2020, the eviction moratorium went into effect and so did the problems with her tenant.

“The moment that happened, he immediately let me know he couldn’t pay the rent,” which was more than $12,000 a month Becker said. “There was a moment in time he was supposed to make a 25 percent payment that they made. Otherwise, he owes me $300,000.” Because the tenant is not required to give any proof of Covid impact, there’s nothing she can do about it.

“It’s a tremendous burden,” Becker said. “I’m not a rich person. I’m semi-retired. Basically, it caused me to go back to work. I’m in my mid-60s. I wanted to retire now.”

Ronda Katinos of Santa Clarita said she is owed $63,000 by her tenant. “It’s our personal home which we rented out,” Katinos said. “He paid two months and stopped paying. Now I’m trying to evict him and have paid $10,000 in attorney fees. I’ve applied for rent relief and have been waiting since July to receive it.”

Katinos lives in her mother’s house so she could rent out her house to a tenant with a wife and two kids. The arrangement quickly went south.
“He moved in in February of 2020,” Katinos said. “He paid for two months but has not paid since. … I gave him a 60-day notice. I wanted him out. He claimed that he had been affected by Covid, which is why he doesn’t have to pay.”

Katinos said she had invested about $50,000 to fix up the property.

Anuj Bansal of Valencia is another landlord with a story. Bansal rented out his single-family home to a tenant who owns a wine bar. Bansal’s tenant moved in May 2018 on a year lease that was eventually renewed again to May 2020.

“The restaurant was shut down because of Covid,” Bansal said. “He told us he was affected and wouldn’t be able to pay the rent.” At first, Bansal was sympathetic and didn’t pressure him.
“That went on for about a year,” Bansal said. “He paid us zero rent.” At that point Bansal had lost $34,000 in unpaid rent.

In March 2021, Bansal learned about the Housing is Key rent relief program. He tried to get his tenant to apply. “We would have this conversation almost every month,” Bansal said. “There was always a story that he continued to delay.” By October 2021, his tenant still had not applied.

“He claimed he had applied,” Bansal said. “Every time we would check, they’d say no, the application is not complete. He kept insisting that he applied but we knew for sure that he hadn’t.”
In January, Bansal took him to small claims court and won the case. But that didn’t end the matter because Bansal said judgments are hard to collect. Even with the restaurant open again, the tenant won’t pay rent.

“There has to be a check and balance,” Bansal said. “When it’s one-sided, you are open to all kinds of fraud. Our tenant was an opportunist, he saw an opportunity and refused to pay rent.”
Even larger landlords are experiencing the strain. Universe Holdings’ Manoucheri said the eviction moratorium has made the Covid pandemic the worst period in his 35 years in real estate.

“This is actually far worse than an economic downturn when your rents go down but people still pay rent,” he said. “And we can’t even evict them, they just sit there for two years.”

The losses to landlords involve more than money and include friends and desire to remain in California. Richard Artman said that the tenants at the single-family home he rented out in Pacoima lied about not being able to pay rent and even resorted to illegal subletting.

“We offered to reduce rent to 80 percent before the state relief package was available,” Artman said. “We also filled out the paperwork for the tenants and requested they provide their information so we could be paid. They refused but would not explain why.” For more than 12 years, they were great tenants, Artman added.

“Then Covid hits and they’re not going to pay,” he said. “I considered them my friends when this happened.” Bansal, the landlord in Valencia, said “it seems like the county is doing everything they can to drive the landlords out of business.” He and his wife want to their sell houses and move out of state.

“We’re kind of done with California with just this experience we’ve had these two years,” he explained. “California is not the U.S. anymore, it’s something else. They come and take something that’s yours. This is the new wild West here.” Bansal added that the situation cost him more than just missed rent.

“The financial pressure is just one piece of it. But the cost in stress is just terrible on your family relationships, on your health,” Bansal said. Becker finds herself in a situation where she can’t move back into her own house. She also had to borrow money to get by. “I have to get a loan so that my tenant can stay in my house for free,” Becker said.

To her surprise, she found out that she also didn’t qualify for rent relief. “If he was paying $2,500 a month, I might be able to get rent relief. But if you have a high-income tenant, you’re not going to get the relief,” she said. “There’s just too many things that are wrong with this legislation,” Becker said. “Too many penalties for landlords. I’m not a lender. If he can’t pay, why should he be living in my house?”

Becker said she can’t even express her anger toward her tenant because he will counter with a legal notice. “I can’t let him know that he’s stressing me out because that would be mental duress on him,” she said. Yukelson with the Apartment Association said regulations will cause large-scale damage to the already scarce rental housing inventory.

“As the small rental property owners are driven out of this business,” Yukelson said, “major corporations will take over these smaller, older properties that have traditionally provided the bulk of affordable housing throughout the county and will redevelop the properties into luxury units or condominiums thereby removing these affordable rentals permanently from the market. This can only result in a major loss of affordable units within the county.”