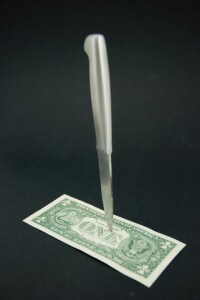 A tenant was attacked by a fellow tenant and the victim claims his attacker was wearing what appeared to be an apartment security badge.

The tenant was confronted as he entered the front door of his Queens apartment building by another tenant who claimed to be apartment security, according to the news report.

The victim, a Buddhist, refused to hit back, and is seen on a surveillance video taking a serious beating that allegedly caused a concussion. The victim says he was pulled off his feet by his throat and tossed around on the ground before being forced into the elevator.

The “security guard” called police to report the man as a trespasser, although the victim had lived at the property for over three years, according to the report.

Police were reluctant to arrest the vigilante tenant.  After the attacker flashed his badge, the officers at the scene concluded that it was a civil dispute, not a criminal matter.  However, after a higher-ranking officer watched the surveillance tape, the “security guard” was arrested and charged with assault.

The mother of the attacker told reporters that her son was emotional over previous problems at the property.

Landlords take a significant legal risk by delegating apartment security to fellow tenants on the premises,  particularly when those persons are not carefully screened and trained in acceptable security procedures.

If it can be found that a landlord condones such criminal behavior, or gives  the authority to police tenants to any individual who may not be competent for the position, the landlord could face a claim of negligence.

The attacker was charged and released without posting bond.  It is not known if he was allowed to return to his apartment, which is near the victim’s unit.

The victim told reporters he was grateful that the man was not armed.

The guard’s defense is that he did not know the resident he attacked, according to the report.