Boomers are warming up to colder locales 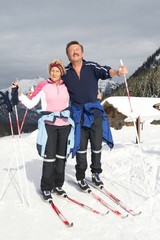 When I was writing a column about the growing popularity of mountain locations for second homes, in the course of my research I called Teri Lester, a Realtor at Gateway Land and Development in Vail, to find out what was going on in that famed Colorado ski area.

We chatted for a long time about what was going on in Vail, and one of the things on her mind was the amount of retirees that were moving to her area.

I was a little surprised because my parents moved to Florida in the 1960s and stayed there through the retirement years, while I have lived in Arizona for decades, and both hot-weather states have been known as Meccas for retirees. Somehow this translated in my mind to the conclusion that people retire to warm-weather locations partly because they are tired of the cold and spend their winters digging out of snow.

Whew, was I out of touch!

While the escape-the-winter blues is definitely a key rationale for some retirees to move, it certainly isn’t a motivation for others. Where people retire and why that particular location was chosen is much more random and will get even more so in the future as the Baby Boom generation slouches toward its retirement years.

“One of the things we are going to see with the Baby Boom generation, partly because it’s such a very large pool of people, who are very diverse and a bit more independent thinking, will be more people venturing into new places to retire,” notes Ron Manheimer, who until recently was the director of the North Carolina Center for Creative Retirement at the University of North Carolina at Asheville.

Manheimer retired from his job after 21 years but he’s not heading to some condominium in Florida to play golf. He’s formed a new consulting firm called The Manheimer Group.

The Sunbelt has traditionally been the most attractive group of states for retirement, Manheimer explains, “but there is a big range within that region, and where people go depends on how much warm weather they want and how often they want it. We find there is a whole segment of people who like the change of seasons — they don’t want to live in a place that is always hot.”

When I was talking with Lester, I asked, “When did Vail become a retirement location?”

It was a slow build but it’s been going on for a while, she told me, “and every year it gets bigger.”

What happens in a place like Vail is that families come to ski the area when the parents are in their 40s or 50s and they like it so much they decide to come back in retirement.

“They sell their homes back from wherever they are from and buy something bigger so their children or grandchildren can come to visit,” Lester says. “Even if they know Vail, they are surprised to find there are so many things they can do here when they retire.”

As yet there are no retirement communities in the Vail area, but there are golf resorts. “This is an active lifestyle place, and retirees are integrated throughout the Valley,” she says.

As I looked into this mountain option for retirement, I saw that places such as Lake Tahoe in California’s Sierra Nevada mountains are making a push to also attract this population segment, but the ski areas outside Salt Lake City in the Wasatch Range are not.

Probably no mountain area has been more aggressively seeking retirees than the Appalachian mountain regions of Georgia, North Carolina and Tennessee. By mid-decade, Georgia and North Carolina had consistently held the fifth and sixth positions among the top-receiving states of all 60-and-over migrants, and Tennessee usually comes in about eighth, reports William Haas, a University of North Carolina, Asheville, professor of sociology working at the North Carolina Center for Creative Retirement.

The first three states are still Florida, Texas and Arizona — all relatively flat and known for moderate winters. The fourth state is California, which reports some very interesting, if not unique, data points. For the 60-and-over migrant crowd, the state shows a large number of people moving in but an even larger number moving out, so it actually loses more of the retired migrant universe than it gains.

Florida remains the No. 1 state for retirement migration. Yet its once-dominant position has been sliding for the past three decades. According to the 1980 census, reports Haas, Florida garnered 26.3 percent of all 60-and-over retirees who moved out of state. That number fell to 19.1 percent by the 2000 census, and hit a low of 12.5 percent in 2007.

Even more importantly, Florida is beginning to act a bit like California. People move there after retirement but don’t stay put like they once did.

Of the top 10 states in terms in-migration of the 60-and-older group, Arizona and North Carolina on a percentage basis captured the best record of keeping them down on the golf home.

So where are baby boomers going to retire in the decade ahead? The answer: almost everywhere.

Do not expect traditional retirement patterns to repeat, cautions Manheimer. “When the economy improves and things pick up where they left off, there will be heavy interstate migration of retirees to places much more diverse than anything we’ve seen before. It used to be the top 10 retirement states would grab 50 percent of all interstate retirement migrants. Not any longer.”

Steve Bergsman is a freelance writer in Arizona and author of several books, including “After the Fall: Opportunities and Strategies for Real Estate Investing in the Coming Decade.”
Copyright 2009 Inman News