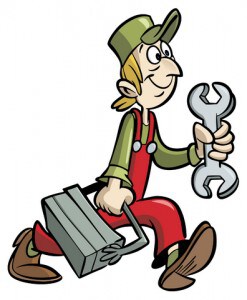 Q: I co-own a duplex in San Francisco that was built around 1912. This was a single-family home that was converted to two flats. I occupy the upstairs flat.

In 1979, a 16-by-24-foot addition was built on the ground floor, first floor and top floor. On the top floor, a wall separates the kitchen from the rest of this area. On the other two floors there is no wall in this area. This wall goes floor to ceiling, is 9 1/2 feet long and runs parallel to the 16-foot dimension (of the addition).

Can I assume that because no wall exists in this place on any of the other floors, this is not a weight-bearing wall? How can I tell? Do I need to bring in an engineer?

A: It sounds to us as if you’d like to open up some space in your upper flat. First, never assume that a wall in a building is non-weight-bearing. But we don’t think you need an engineer to answer this question.

Hopefully, since the addition was built in 1979, it was done with appropriate plans, permits and the accompanying inspections. If the addition wasn’t bootlegged, plans were submitted, checked by a city plan-checker, and run by an engineer in the building department.

But that alone doesn’t answer the question of whether you can modify the wall.

The easiest way to determine if removal of the wall is possible is to take a look in the attic and measure the width of the ceiling joists. Assuming the joists run the 16-foot direction, are 16 inches apart and made of Douglas fir and there is no attic storage, a 2-by-6 ceiling joist will allow a 16-foot span.

If that’s what you’ve got, you can safely remove the wall. If the ceiling joists are smaller or spaced farther apart, you can find the proper specifications on a span table.

If the ceiling joists run the 24-foot direction, the job becomes exponentially harder. As an old friend used to say, “Not impossible, just costs more.”

There are other alternatives. Both mean more work and more money.

If you want to remove the wall, it’s possible to insert a beam into the ceiling to pick up the structural load of the ceiling joists. This is a big job, and unless you’re an accomplished carpenter this is not a do-it-yourself project. It involves building temporary support walls, cutting existing ceiling joists and inserting a proper-size beam supported by bearing partitions at both ends of the beam.

The other option is to create a pass-through or passageway — basically an opening in the existing wall to visually open the space. If you have moderate carpentry skills, this is a job you can tackle yourself.

First, remove the wallboard from one side of the wall to expose the framing. Remove the studs where the opening will be. For the 9 1/2-foot wall, the most we’d take out would be 6 feet.

Next, frame the opening. For a 6-foot opening we suggest a minimum 2-by-10-inch header supported by two jack studs at each end. The header is the framing member running parallel to the floor. It supports the ceiling joists above. The jack studs are shortened 2-by-4s nailed to the full-length wall studs you left, also called “king studs.”

To finish, cut out the drywall on the other side of the opening, then drywall the side where you’ve removed the drywall, tape, texture and paint.

Both jobs require a permit. We suggest you get one. It will cost a little bit, but you’ll get the peace of mind provided by the blessing of a professional inspector, and you won’t have to disclose non-permitted work on the seller’s disclosure statement when you sell.