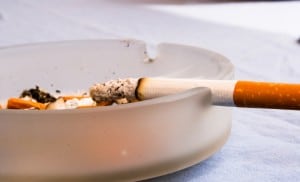 A new law in Buffalo, New York creates more work for landlords.
There was little notice when the law went into effect this spring.
Landlords must now draft an additional disclosure document- one that lays out whether smoking is allowed on the rental property, and if so, where.  The tenant must receive this disclosure before they sign.  Landlords also must modify rental leases to track the new policy.
So why are landlords so happy to have this extra work?
In part, because legislators took the time to survey landlords and tenants alike before crafting the new rules.  An eviction judge participated in the drafting of the law.
Litigation over second-hand smoking is rampant in Buffalo, most commonly in eviction cases.  The courts consistently have shown leniency with tenants who wish to break their lease commitment because someone else in the building smokes.  In fact, the cases have defined second-hand smoke as a hazard that destroys habitability – a legal term of art in constructive eviction cases.
The lawmakers are hopeful that this new language will quell a number of landlord-tenant disputes.  Landlords in turn are happy because it could keep them out of court.
Landlords are also in favor of the law, not so much for what it says on its face, but what’s between the lines.  The city falls short of dictating to a landlord whether to allow smoking, as this is still a legal activity.  But clearly the intent is to encourage nonsmoking policies in rental housing.  This is evidenced by the enthusiastic involvement of anti-tobacco associations in drafting the rules, and promoting some significant benefits to entice landlords to go smokeless:
Tenants favor nonsmoking rentals.  Less than 1 in 5 adults smoke.
Tenants with a nonsmoking preference will pay higher rent.
There is an immediate reduction of risk of fire on the property.