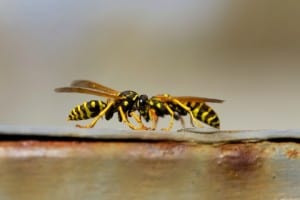 A Hartford, Connecticut landlord found that honey is not so sweet — especially when it’s dripping out of the ceiling.

According to a news report, it took exterminators several hours to tackle a bee infestation inside an apartment that had forced the terrified tenants out.

The couple went to the news saying that enough wasn’t done after they reported multiple times being stung by bees in their apartment. They say the problem didn’t occur overnight; it’s been building over the past three years.

Now that the bees have been removed, the property manager is suffering a different backlash over having the “hive” exterminated — not to mention gallons of honey wasted.

Apparently, the naysayers may be right. Experts agree that a bee infestation could be handled more civilly — and more effectively — by temporarily stunning the bees, and then removing the lot of them to greener pastures — hive and honey intact.

According to the report, the property manager said she’d never considered that option; she was just trying to solve the immediate problem. Something for others to consider, though.

Another important step is pest-proofing a rental property by plugging small holes and gaps, and performing frequent inspections so that nothing uninvited takes up residence. These bees got in through vents, and built an entire honeycombed empire in the ceiling before being detected. The occasional stray bees were a sign. Unfortunately, where there’s one or two bees, there are plenty more at home.

The extermination team is now combing through other parts of the building to see if the infestation is widespread, according to the report.