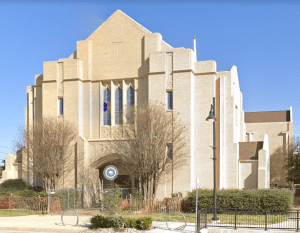 Cielo Place is the new name for what was formerly Riverside Baptist Church, a house of worship that dates back to 1904. According to the developers behind Cielo Place, the church was in danger of demolition when an office developer closed on the property in 2018, prompting nearby residents to urge the city to place a historic hold on the building.

The city of Fort Worth then reached out to Saigebrook Development to see if it would be interested in purchasing the property, which it did in 2019, President Lisa Stephens said.

A historic designation for the church granted by the National Register for Historic Places in 2020 opened up state and federal tax credits that could be used to help pay for the renovation. In partnership with investment partners Hunt Capital Partners and Aetna, Saigebrook carried out the $22M project.

“We knew that it would go quickly,” Cruz said. “There is such a need for affordable housing in Fort Worth in general, but also in close proximity to downtown.”

Many longtime residents of the Race Street area have been displaced as a result of recent gentrification, Stephens said. This project, which includes 80 affordable units and 11 market-rate units, was able to keep some of those families in the neighborhood.

“When [gentrification] begins to happen, housing prices begin to go up and folks tend to get pushed out,” Stephens said. “Being able to come in and provide these units and have the affordability combined with the accessibility, we think will have a long-term impact on this neighborhood.”

The building was expanded twice in the 1950s, and its last church service was held on Christmas Eve 2018. Saigebrook tasked Miller-Slayton Architects and interior design firm Ink & Oro with updating the building while preserving elements of its design.

Pieces of the church’s original stained glass windows were incorporated into the interior and exterior, and the common area features pews from the original sanctuary, altar and baptismal, according to Saigebrook. A community unveiling event will be held at the site on Dec. 16.

“As we peeled back the layers of this building — painstakingly preserving and restoring the woodwork, stained glass windows, light fixtures, and structural components — we also peeled back layers of history and learned so much about the history of this church and the community that has gathered here over the years,” Stephens said in a statement.