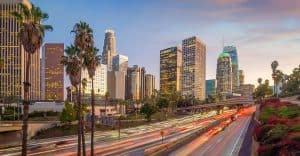 A recent report offers a new perspective on the pace of gentrification in Downtown Los Angeles, finding more than 10,000 apartments have been built in the area since 2017, tops for any locale nationwide.

The report comes from RentCafe, an apartment-search website that regularly publishes proprietary research. RentCafe analyzed construction data between 2017 and 2021 across the nation’s 50 largest cities, and used its own neighborhood boundary maps. The analysis only counted buildings with 50 or more units.

Downtown L.A.’s spot at the top of the list is not exactly a surprise –– developers have been pursuing a “live-work-play” transformation of the city’s center for more than 20 years. The additions of residential and retail amenities have brought change to areas dominated by offices as well as working commercial districts for the garment, jewelry, toy and produce trades.

The process has reversed a trend that went back to the latter half of the 20th century, when the city’s center fell into second-class status as Los Angeles set a course of decentralization. The planning relied on the extensive freeway system that laces the city, and created new residential and commercial hubs in outlying districts such as Century City, the Wilshire Corridor and Woodland Hills in the San Fernando Valley, among others.

Downtown LA’s residential resurgence began as a light-rail system grew and new city ordinances relaxed requirements for parking and offered other incentives for conversions of commercial space to residential, sparking gentrification with a boom in lofts.

The trend saw a slowdown with the financial crisis and Great Recession but resumed momentum in its wake, as luxury developers sought to capitalize on relatively cheaper real estate and the area’s central location with new construction.

The pandemic hit the neighborhood’s commercial and entertainment districts hard, although several big, high-end projects continued to completion, finishing a number of residential developments that helped notch the numbers tracked by the RentCafe study.

Some observers expect development in the area to soon get back to its pre-pandemic pace.

“Up until the pandemic, things were rocking and rolling,” Mark Tarczynski, an executive vice president at Colliers who specializes in downtown projects, said recently. “And I will say that it’s poised to come back.”

One project, the recently-finished Singer Building lofts, only adds six units but sets a new benchmark for pricing and apartment size in the neighborhood — another sign of the DTLA’s transformation.

Midtown Atlanta, which saw 5,900 apartments go up between 2017 and 2021, ranked second in RentCafe’s analysis. The Queens neighborhood of Hunters Point ranked third, with 5,400 new units.