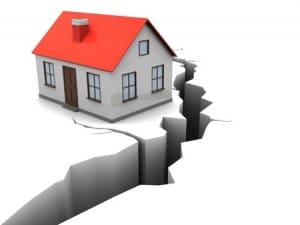 Earthquake insurance is now more widely available than ever before in the commercial marketplace.  Coverage is available for most types of construction and even for very old buildings.  Of course, prices are more expensive for older or taller buildings and those made of rigid materials such as brick or concrete than for wood frame 1-story buildings.  At this time, prices typically range from about $1.75 per $1000 of coverage for the newer frame buildings to more than $10 per $1000 for older brick or concrete buildings.

If you do have an older frame building, you can save substantially on your premium by having your building bolted to the foundation (and shear walled).  This retrofitting can save you up to 50% on earthquake insurance.  Pricing for these buildings usually runs about $5.75 per $1000 of coverage if they are bolted.

A rule of thumb is that if you have substantial equity in the building or if it is a strategic part of your financial situation, earthquake insurance is much more important than it would otherwise be.

Which Companies are Offering Earthquake and how safe are they?

There are now many companies providing this coverage for commercial buildings.  Most are “A” rated.  An “A” rating from one of the rating services such as A.M. Best & Co. or Moody’s lets you know that they have a substantial measure of financial security.  There is a number which goes with the rating which lets you know the financial size of the company.  That number ranges from 1 to 15 with 15 being a company with over $2 billion in assets.  More information on ratings can be found at www.ambest.com.

Another important factor in financial security is their reinsurance.  Reinsurance means that a company may only take on a small amount of risk for each building they insure, passing on the balance of the risk to one or more reinsurers.  The ratings of the reinsurer then become important as well.  Many smaller companies are very safe because of reinsurance treaties with very large international companies.

One more safety indication is whether the company is a “California Admitted Carrier”.  If they are, the California Guaranty Association, which comes in to play if a company cannot pay its claims due to insolvency, additionally backs them.

Of the many companies we work with such as Lloyds of London, Clarendon, ICW, Pacific

Specialty (a part of Hartford Insurance Co.), RLI, Associated International, Pacific Select, GeoVera, etc…  all have either an “A” rating or have treaties with reinsurers who do.  Many are California Admitted.

There is nothing really “bad” about a non-admitted carrier if they have enough solvency due to substantial size or geographic distribution of risks.  Lloyds of London is a perfect example of such a company.  They carry an “A” rating and due to their very broad distribution of risk, are considered a safe haven for earthquake insurance in California.

Be sure to include loss of rents or loss of income in your policy, Building Ordinance Coverage and Ground Utilities as well as earthquake sprinkler leakage* if you have sprinkler system.   In determining the amount of earthquake insurance to carry, remember that building costs will be at a premium after a loss, so be conservative in the amount of insurance you choose to carry and make sure the limits are high enough to actually rebuild.  The only downfall of increased coverage is increased deductible as well, since it’s a percentage of coverage amount.

* Earthquake sprinkler leakage is a coverage which can be added to most building policies as an option, even if you choose not to buy an earthquake policy.  It is a must for any sprinklered building because while a system that leaks can do major damage to a building, the loss would be excluded by the building policy if the leakage is directly caused by an earthquake.

Benjamin Sarto is an independent insurance Broker with Gordon Insurance who has been providing insurance products and consulting to commercial property owners for nearly 40 years.   Feel free to contact us at 650-567-3562 or [email protected] for more information on any insurance matter or if you would like to see a particular subject addressed in future issues. “If it’s not burning, we can write it”