What do you do when a pet owner won’t scoop the poop?

A west Raleigh apartment complex, The Dakota, is using dog DNA to catch pet owners who fail to clean up after their canines.

A handful of companies offer the service across the country including Cary-based PawzLife. Most dog owners and residents love the service because it gets rid of an environmental and health hazard, said Matthew Malec, owner of PawzLife.

A small percentage of pet owners dislike it, he said, probably because they’re the ones not bagging their dogs’ business.

“We are just trying to make the Earth a little bit better to live on,” he said. “It is a unique process, I’ll give you that. Who would have thought we would use DNA to figure out who is not picking up after your dog?”

The process starts with a “pup party.”

Residents are required to bring their dogs to the party where their saliva is collected. The process is quick — a 20 second swirl around the inner cheek — and painless, according to the company’s website. There’s no blood collection or more invasive collection methods.

A “unique DNA profile” is created for each dog, and the company will come through the community to collect the wayward poop. If there is a DNA match, the owners will be fined $100 per offense, according to The Dakota’s email to residents. 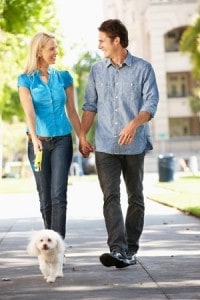 ‘POOP ALL OVER THE PLACE’

Tyler Vahan has lived in The Dakota since last fall and has a 2-year-old hound mix, Aria. He’s a fan of the service as long as it doesn’t raise pet fees. He picks up after his dog, but she’s stepped in poop while outside. He pointed to a handful of droppings on his walk Thursday.

Janice Mills doesn’t own a dog, but said some of the apartments have a deck with grass outside that some pet owners let their dogs use as a bathroom without cleaning up.

“You walk around and see poop all over the place,” she said. “It needs to be controlled.”

The apartment complex had previously asked neighbors to report on one another, said Meredith Givens, who has a 6-month-old miniature dachshund named Ziggy.

“I’m cool with [the service] because it will make the complex a cleaner place,” she said. “It isn’t my job to police the community and try and hold people accountable.”

There are about a dozen apartment complexes the company serves. As a former dogwalker, Malec said it was the “ultimate slap in the face” to bag poop to throw away and then step in some that others had left behind.

“Is it overkill?” he asked. “It’s a great question. Maybe, but at the end of the day it is fixing the problem. We are getting good results.”