‘You Need More EV Charging Spaces Than You Think’: Greener Additions Becoming Easier To Get Into Projects 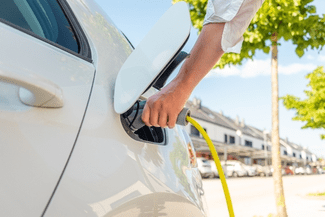 Southern California’s car culture is changing, and developers and architects are laying the framework in their projects for a near future where there are fewer cars but more need to be charged.

Ten years ago, he said, it was a struggle to get AvalonBay’s investment committee to approve 10 new EV chargers on a project, but as electric vehicles began to hit the road and become a more common sight on city streets, that has changed. Now, Janda said, AvalonBay is considering putting an EV charger in as many as 25% of parking stalls.

At one transit-oriented development, parking is being considered as temporary, according to McCullough senior associate Benjamin Arcia.

“We designed everything under the parking podium as retail space that’s temporarily occupied by parking,” Arcia said. “We’re going to remove parking and insert retail modules under these residential buildings as the neighborhood becomes more and more ready for it.”

Sustainability in general was a theme throughout the conversation, with speakers touching on the rise in consumer interest in supporting sustainable companies and products.

“Every one of the deals that we do at PACE Loan Group, we require an energy audit,” PACE Loan Group Vice President Ed Wlodarczyk said. “I want to make sure and our partner, who’s actually giving us all the money to put out there, wants to make sure that we’re doing something that actually works.”

Project delays and challenges because of the coronavirus were also discussed.

AvalonBay has partnered with Abode Communities on a massive redevelopment of the West LA Civic Center that will involve 926 residential units, roughly half of them income-restricted affordable at a variety of levels.

That project once anticipated a 2023 groundbreaking, but that has been pushed to late 2024, Janda said. The delay, which Janda said “isn’t that unusual for projects of this scale,” was chalked up to the complex nature of the deal. The property has two owners, the city and county of Los Angeles, and the county bought the land from a state entity.

Janda pointed to AvalonBay’s Arts District project, which is under construction but took five years to get to groundbreaking.

“It’s not uncommon in LA, and it’s one of the reasons why there’s a housing shortage, because it’s so difficult to build,” Janda said.

BLVD Hospitality’s Margaux Rotter detailed how Covid-19 slowdowns took the citizenM Downtown LA hotel, a modular design, from being six months faster than conventional construction to taking just about as long as the project would have taken with traditional construction.

State-level approvals of the modular units shaved off time and avoided some of the red tape that might have come with seeking city approvals for the project, Rotter said.