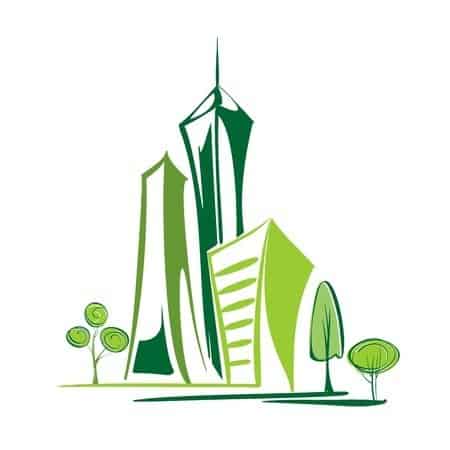 “We think it’s safe to say it’s [also] the greenest student facility in the country,” said Jason Wills, chief marketing officer of student housing REIT American Campus Communities which developed the project. Wills adds, “Sustainability can be comfortable, homey and affordable. It does not have to feel different or compromised. Plaza Verde is a perfect example of that.”

The fully furnished apartments at the five-story, 1,441-bed property were designed with the convenience—and budgets—of students in mind. They do not have to pay a premium to live in LEED Platinum housing. Starting at $789 per person, Plaza Verde’s rents are in-line with other ACC-Irvine projects and, according to Wills, they continue to be approximately 20 percent less on an “apples-to-apples” comparison to other student housing communities in the market.

“LEED Platinum certification is a side benefit of the efforts to design an extremely high-performing building, but the main goal was to achieve the University of California’s overarching Net Zero energy goal for all new buildings on their campus,” said Ben Kasdan, AIA, LEED AP, associate principal with KTGY Architecture + Planning which designed the building. KTGY partnered with interior designer CRA Design for the common area interiors and finishes in the units.

Plaza Verde includes an all-electric system that eliminates the need for natural gas and uses new technology, such as heat pump water heaters and an electric outdoor grill system, among other efficient appliances. “We quickly decided that this building would not have any natural gas service, as natural gas is a non-renewable energy source,” explained Kasdan. A typical energy-efficient strategy for providing hot water in large buildings would be to use a central boiler system, but at the moment there is no such thing as an electric boiler system that can serve a building this size. So individual electric water heaters and heat pumps were installed for every unit.

But ACC didn’t focus exclusively on the reduction of gas consumption. “That’s the norm with Net Zero, but with that model, at some point in time, it gets cost prohibitive,” explained Wills. Instead, the offset was “oversized” by increasing the number of solar panels. In addition to Plaza Verde’s own parking garage, a second parking garage on campus was also retrofitted with a photovoltaic array to achieve the needed surface area.

ACC tested systems at its other properties first to make sure they would work well at Plaza Verde. “For example, we put in the electric grills in other communities and used them for two years before Plaza Verde opened to test their efficacy. We tested the water heaters that use heat pump technology in other facilities as well,” said Wills.

Plaza Verde’s sustainability continues beyond construction and into operations as well as resident behavior. Ceiling fans make the facility more comfortable and efficient while lowering the energy consumption of the whole campus. Water-conserving plumbing fixtures contribute to significant water reduction in potable water usage. And students are encouraged to use alternative transportation options including bike storage which accommodates more than 760 bikes. The Irvine location provides access to several public transit lines and close walking proximity to community services.

Also contributing to Plaza Verde’s LEED Platinum rating are eco-friendly building materials that limit the negative impact associated with raw material extraction and transportation. All of the wood is either non-tropical, reclaimed, or sustainably harvested in accordance with the Forest Stewardship Council. Native, drought tolerant landscaping combined with recycled water helps to reduce the demand on potable water by 100 percent.

UC Irvine set a high bar for Plaza Verde. “We are going to be tracking all of our consumption and will report findings and key learnings,” said Wills. “Right now, the main lesson is, all of this can be done within a cost-effective building model. It’s a Type 3 building that is affordable, showing it does not have to be high-end luxury but rather can be a student-friendly product type.”

These lessons learned at Plaza Verde and Capital One Tower bode well for future sustainable development.

Read more
LEED Multifamily...
LEED rent premiums average around 3.1%. LEED-certified multifamily properties are consistently...
Read more
‘You Need More EV...
Southern California’s car culture is changing, and developers and architects are laying the...
Read more
Rental Listings With...
When US renters can compare the energy efficiency of houses or apartments, they are 21% more likely to...
Read more
4 Smart Ways to Reduce...
With the cost of living continuing to rise, people across the country are heavily thinking about...
Read more
Developers Hesitant To...
Developers are considering the long-term capital benefit to increasingly energy-efficient multifamily...
Read more
Avoid Pitfalls –...
As the Electric Vehicle (EV) market in multifamily charges up (yes, I am trying to be funny), there...
Read more
L.A. is banning most...
Citing the climate crisis, the Los Angeles City Council voted Friday to ban most gas appliances in new...
Read more
Saving the environment...
Americans are becoming increasingly worried about global warming, according to a study carried out by...