Home·Property Management·Latest News·COVID-19·Exactly how much have Chicago rents gone up since the start of the pandemic?

Exactly how much have Chicago rents gone up since the start of the pandemic? 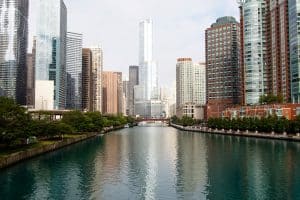 The big lease deals and rental concessions that were offered by residential landlords a year ago appear to be all but gone as the apartment market has rebounded since the start of the pandemic. Despite a short bump in the road in the spring of 2020, the Chicago multifamily market has remained mostly steady and landlords have not had similar issues leasing apartments this summer as they had a year ago. The market has been going so well, that one top luxury leasing executive proclaimed that “demand for urban, new luxury apartments has never been stronger,” in an interview for Illinois Real Estate Journal’s August issue.

But exactly how much have rents gone up in the time since the pandemic began? A recent report from ApartmentList.com offers insights on both national and regional-level rent trends and breaks down prices for major metro markets, such as Chicago. One of the big takeaways is that from a big picture perspective, the national median rent price has increased by a whopping 13.8% since this January, the report indicates. This means that overall rents have increased at a far greater rate than during the same period in pre-pandemic years combined: rent growth averaged only around 3.6% between January and August in the years 2017 through 2019.

Within Chicago, the median rent growth has increased 4.4% over the last 12 months, ApartmentList.com indicates. This is actually lower than the combined Illinois media rent growth during the same period, and far lower than the national rent growth percentage. When looking at month-over-month, the rents have increased by 1.1% between July and August 2021. However, the bottom of the market was back in December and January when average rents had decreased by nearly 12% since the baseline of August 2020.

In terms of how much one should expect to pay for an apartment in Chicago, the report offers dollar amounts for various floor plan types. For instance, the median price for a two-bedroom in the Chicago area costs roughly $1,423 per month while a one-bedroom is around $1,291, ApartmentList.com suggests. Chicago’s median rent for a two-bedroom is higher than the national average of $1,246, but significantly lower than notably pricier markets, such as San Francisco where the media two-bedroom cost is $2,776.

So, why are rents going up so much in major cities across the country? A big part of it is returned demand as renters have shuffled around and moved back into big cities. Some companies have had teams back at the office since the spring, while others had made plans to return after Labor Day. And while those plans have been pushed back for many companies, employees had moved back into cities in preparation for the return to work. Another big reason is simply the high level of inflation we have witnessed so far in 2021. With an inflation rate of over 5%, the value of money is decreasing at a faster rate than normal, thus key consumer costs and indexes on items like housing, food and transportation have increased significantly during this high inflationary period.