Shipping containers, tiny houses, micro-units — all have been explored as potential solutions to the affordable housing crisis. But what about decommissioned cruise ships functioning as floating apartment buildings? 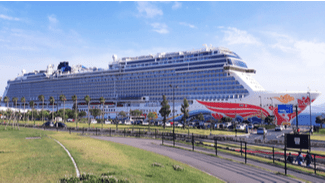 Ibrahim Desooky, a 27-year-old architectural designer in the Miami office of CallisonRTKL, decided to research the feasibility of such a thing after noticing that a record number of ships were decommissioned in 2020. He figured it could be logical to repurpose them as housing, and that they’d be rather immune to sea level rise.

Desooky, who typically works for cruise lines on land-based projects, like beach clubs, won a $3K grant from his firm to execute the research project.

According to a professional polling firm that Desooky engaged using that grant, potential renters are showing interest in the concept. Of those asked, 88% said yes or maybe to the idea. “Those expressing the greatest interest are 41-50 years of age, earning at least $100,000 per year, who are single or have children, and willing to pay $849 (mean) and $4,000 (max) per month,” according to his final report. However, some people said it would be a deal breaker if cabins could not be redesigned to include kitchens.

In 2020, Desooky found, Carnival Cruise Line alone sold 18 ships, a reduction of its fleet by 12%. That was in part due to a change in emission regulations by the International Marine Organization, which required all vessels to reduce sulfur oxide emissions by 77%. That meant updating engines and fuel emission systems. Some companies found it more cost-effective to retire ships and get new ones.

When a ship goes out of service, Desooky said, it is often bought as scrap by companies in India or Turkey.

“Basically what happens is: They tear it apart, the interiors, all of the soft goods, and then they throw that out. Then they take the steel and they reuse it for their infrastructure and building,” Desooky said. “But the problem with that is, one, it’s super environmentally unfriendly, because of the agents that are released in the construction process, and it’s considered one of the most dangerous occupations in the world. In India, one person dies every week deconstructing these ships.”

Leaving ships intact as housing could extend their life cycle and be better for the environment. But they’re not free: Scrappers pay $1.7M to $11M, even for a small cruise ship. Even if a ship can be secured, finding a place to dock it and plug it into shore power could be a challenge.

Large ships require deeper sea bottoms. A panel of engineering experts that Desooky engaged looked at the potential for deepening a channel in Miami to a depth of 50 to 52 feet. Underwater dredging costs start at $70 per cubic yard, making it more feasible to go with a smaller ship that doesn’t draw so much water.

The engineers also advised that repurposed ships might require massive structural platforms. Infrastructure for power, waste management, fueling and more could add $2M to $4M in construction costs. And in hurricane-prone Florida, a ship would need to be moved if extreme weather arrived.

Thus, the engineering experts said, it would be “most conveniently located up-river, or in a body of water that is both deep and passive from a wave activity perspective. An example of this is the Hudson River, where ships are permanently moored, such as the SS United States, a retired ocean liner, and the USS Intrepid, a retired aircraft carrier.”

Desooky did not pin down exact costs, as that would require more funding for a more detailed study. However, he has been presenting his findings at conferences, and he hoped to perhaps collaborate with cruise lines’ innovation departments.

Some decommissioned ships are already being used to house cruise line workers on private islands, “so there’s potential in that area,” he said.