The few dozen steps spanning the length of a new studio unit at Domain Heights incorporate a veritable check, check, check of what developers have billed as the amenity-heavy future of apartment living. 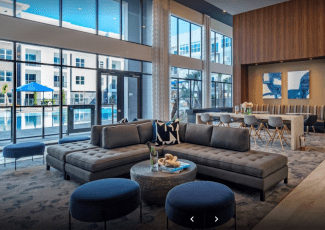 A hallway of entry doors inside the complex is sparkling new, featuring grayish paint and modern fixtures, though nothing out of the ordinary for a just-completed building. But visitors entering the front door of one of the studios are immediately hit with surprises: In addition to a bevy of post-pandemic features, units offer a several-step walk to a small, grassy private courtyard with a view of the surrounding colorful 100-year-old homes the Heights area is known for.

Those standing on the patio might forget they are in a mid-rise apartment complex. That, Domain Heights’ developers say, is the point.

“You’re surrounded by houses. This feels like I’m living in a house right now,” Jaclyn Anderson, a third-party marketer for the property, said, gesturing from the patio. “It totally changes the apartment feel, which I think, especially because of Covid, people want. You don’t want to feel like you’re living in another apartment. You feel like you’re more in a home.”

While it feels trite to say the pandemic changed everything, when it comes to how people live and work, it is true. Changes in work and commuting patterns have American renters more homebound than they have ever been and demanding built-in workspace, multipurpose features, outdoor access, exercise rooms and other on-site comforts that make apartments more than just crash pads.

Domain Heights, which claims to be one of the first completed new multifamily projects conceived and built during the pandemic, listened. The project was initially designed before the coronavirus hit in 2020, but the global crisis caused developers to rethink and toss out previous plans.

The space is now outfitted with glitzy amenities designed for the work-from-home, public space-skittish young professional. The two-story gym offers virtual workouts and private yoga classes, while the massive central pool — at about 9K SF, Domain Heights calls it the largest private pool in Houston — looks like it is out of a resort, with partially submerged lounge chairs and cabanas.

The building offers coworking spaces on the first floor, room plans structured for flexible office space, including movable counters, and a long list of other amenities developers hope make the space appealing to those who want a single-family experience in the desirable, walkable Heights neighborhood but who balk at the mortgages in the area, where homes go for an average of about $559K, per the Houston Chronicle.

Flashier multifamily amenities aren’t new, but they shot to the top of renters’ must-have lists as Covid-19 changed priorities for those who are now both living and working in their apartments. A Grimm + Parker Architects survey of renters and developers conducted last year concluded that given the projected success of work-from-home business models, “residents will need their units to become more versatile and adaptable, to provide users with enhanced technology, spatial flexibility, and separation, as well as provide adequate mental relief through connection to the outdoor environment and fresh air.”

Now, two years since the start of the pandemic, some of those proposed changes are coming to fruition in real properties. In both Domain Heights and upcoming projects underway by Greystar, multifamily properties are incorporating coworking offices and hospitality elements to match new renter requests. In June 2020, the National Association of Home Builders predicted that developers would turn the traditional apartment clubhouse into smaller workspaces — and that is exactly what Greystar did. 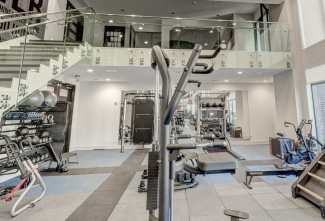 “In the past, we might prioritize the club kitchen or kids’ playroom, other spaces like that that could potentially be leased out for parties, something like that,” Greystar Senior Director of Development Remy Midkiff said. “Now, more and more people are working from home. If you’ve ever worked from home, you know it’s tough to be in the same room every day. People want somewhere else to work.”

Domain Heights is largely targeting young professionals with its amenities and offers a space on the top floor outfitted for both community events and residents’ corporate parties, a two-room suite with a large bar that flows into a patio with downtown views, and an outdoor food preparation area and another bar. The coworking space, too, has private rooms for Zoom calls and a conference room.

The demographic it hopes to attract is reflected in its rents. Community manager Brittney White cites rents at about $1,600 monthly for a studio to $4K for a two-bedroom, plus a monthly HOA-style amenity fee of about $150, which includes a private WiFi network that can be accessed by the renter anywhere in the complex. Some families have expressed interest in the space, but White says the property mostly draws those with a little more income who have most of their bar-hopping days behind them but are still looking for nightlife and restaurants near home.

“I think in the urban core, there will still be demand for smaller spaces in exchange for all the amenities that you get from being in the city and being close to bars and restaurants,” Midkiff said. “People are going to be willing to pay more for a little bit less in order to have access to that.”

Design changes have affected the inside of the units too. Domain Heights’ studios are the smallest units at about 545 SF, but the bedrooms are walled off with a door. Some studios have movable kitchen islands, all to create flexibility for people wanting to get the most out of a smaller space. Larger units have a flex space meant for an office, with a sliding door and no closet.

“Most people actually go after studios because they want to live in a certain area but can’t afford it unless they go for [a studio]. They also want to be minimalist, more people are moving that way,” White said.

The space is open for move-ins and has 35 units occupied, but the supply chain problems that caused a 10-month delay in opening aren’t quite over, as evidenced by the empty spot in the coworking office where a nitro cold brew machine is supposed to stand. Roxann Bacchus, vice president of asset management at developer CityStreet Residential Partners, said that the national chip shortage affected much more than computers, like the cold brew machine, which is phone-activated.

“Sometimes it’s like, ‘OK, are we going to get ice makers?’ We may have the appliance, but maybe they didn’t ship ice makers with the refrigerators,” Bacchus said, also bringing up lighting and hardware fixtures that were severely delayed.

Blockages with city permitting caused delays as well, including with new signage on the property. Since April, the city of Houston has been in a 60-day review period and isn’t reviewing sign permits while it works out a January ordinance. As a result, Domain Heights can’t place more signs on the property.

“We can’t have any extra signs put out,” Bacchus said. “It’s just a backlog of all those things that delay the project. Trying to get people out here — they’re shorter-staffed — makes that harder.”

Developers expect these new elements to stay long after the pandemic is in the rearview mirror. Bacchus said that CityStreet has scrapped a lot of its old design formats and is redesigning its new Texas properties from scratch to reflect new expectations, including upcoming properties in Houston. At Greystar, Midkiff is still seeing strong demand for suburban properties, but the demand is beginning to tick up again for urban sites in defiance of the flight to the suburbs, which he says is part of the transition of the coronavirus as pandemic to endemic.

“That’s how we’re designing spaces now and for the future,” Midkiff said. “The recent projects that we’ve opened, like the Westcott and Arthouse in Sawyer Yards, has that type of amenity space. [It’s] like a WeWork-type space, where there’s plenty of area where you can sit out or at a little table or in your own little nook and work, or you can have your own conference room or you can have your own work pods. Moving forward, our projects have those elements in them.”

Read more
Best loans and...
It's been one of the best ways to grow wealth and take steps toward financial freedom for hundreds...
Read more
3 Impactful Financial...
Becoming a financially successful landlord in 2023 is difficult. Material costs, such as lumber, have...
Read more
How to monitor and...
Whether you own a luxury home in a gated community or a condo in the city, if you have paying tenants,...
Read more
Real estate investing:...
It all looks so easy on HGTV: A couple buys a house, does a complete makeover, and sells it for a tidy...
Read more
How Property Managers...
The COVID-19 pandemic changed how property managers and renters alike defined home. At some...
Read more
6 ways to increase...
Ready for a vocabulary lesson? The verb google (with a lower-case g) was entered into...
Read more
Risks of Long-Term...
Negatives to Consider When a Tenant Renews Their Lease Landlords do not want to have to deal with...
Read more
The Future of...
However busy residential property managers and landlords may be, it’s important to always stay...