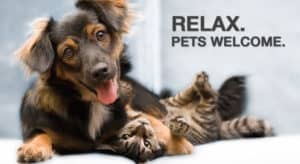 Laura Goodell and her fiance didn’t have a dog when they came to Baltimore a year ago for graduate school — yet. The Equitable Building’s rooftop dog run helped sell them on the apartments in a converted former office building.

“It was my hope we’d adopt,” Goodell said. “This kind of amenity isn’t something every building has.”

Asher, the four-year-old lab mix the couple adopted in May, seems to approve of the space to romp. On a recent post-workday trip to the run, he wagged his tail and stomped his paws, egging on Goodell to toss his favorite ball.

Apartments weren’t always so willing to accept pets, let alone roll out the AstroTurf for them. But with a crush of new apartments in Baltimore and more on the way, building managers competing for tenants can’t afford to pass on pets anymore.

Dog runs, relief areas, washing stations and treats at the door are becoming more common in large apartment projects as managers look to draw in new renters by winning over their pets.

The concierge desk at The Equitable displays a photo of one good boy pup or nice kitty as Pet of the Month. And yappy hours in the building’s penthouse are an exercise in doggie decadence, with treats and tennis balls galore.

“So many people expect it these days,” said Brian Roche, who manages the Bozzuto Group property. “If somebody was going to be starting a community or property, they’d definitely put themselves at a disadvantage if they didn’t allow pets.”

The trend is driven by — you guessed it — millennials.

About two-thirds of millennial households are rentals and millennials are the country’s biggest pet-owning demographic, with just over a third of pets in their care.

As the oldest millennials near the traditional family-building and home-buying age, apartment buildings are under even more pressure to up the ante on amenities that could convince them to stay.

“They’re really trying to provide a lifestyle for that group that is so appealing they’d really have to think about moving out to the suburbs,” said Rick Haughey, vice president of industry technology initiatives for the National Multifamily Housing Council, a trade association for apartment building managers.

A renter’s wish list is an ever-moving bull’s-eye, and managers must weigh whether the cost of adding an amenity will pay off before it goes out of fashion. But a culture shift to count pets as family members suggests that pet-friendly features are unlikely to go out of style anytime soon, building managers said.

“They’re like family,” said Stephen Gorn, president and CEO of Questar Properties. “It’s almost like saying to someone you can’t bring a part of your family to our building.”

Questar is developing a towering glass building overlooking the Inner Harbor known as 414 Light St. that will feature a dog park with built-in agility equipment and a full dog spa, with raised dog-washing basins and vending machines that distribute an array of treats. Questar sought out a Los Angeles artist to design the dog spa and liked her work so much they asked her to do the rest of the building’s interior design.

As pets in apartments shifts from a trend to a lifestyle, pets are increasingly influencing building designs.

The Time Group had planned to put a dog run behind its new Mount Vernon apartment complex, 520 Park. But after seeing how popular pet amenities were at the company’s 500 Park, right next door, the company made an 11th-hour decision — after the building already was under construction — to move the run to a more prominent space between the two buildings, said Dominic Wiker, development director at the Time Group.

Carpet, long an apartment staple because it is cheaper than hardwoods and can make sterile units feel homey, has no place at 2 Hopkins Plaza, where about 55 percent of residents have a pet. The 182-unit building passed on odor-absorbing fabrics in favor of indestructible (but not too slippery) composite flooring, said Elaine De Lude, vice president of LIVEbe, which manages the recently opened apartment project.

“It’s just the standard now for building a new building,” De Lude said. “If you’re trying to compete with that community that’s right next door, also brand new with all the bells and whistles, what are you competing on?”

Such features are an investment. The Equitable’s dog run, for example, was more work than laying a plot of artificial grass on the roof. It had to be built with proper drainage and requires routine maintenance, Roche said.

But developers increasingly find the investment pays off when it comes to attracting renters who don’t want to live without their pets.

After moving to Baltimore last year for his first job out of law school, Alex Stimac was ready for a new apartment and a new roommate — preferably one with four legs and fur. He chose 26 S. Calvert St. for its convenience and reasonable rent, but also because it allowed pets, he said.

Stimac moved into his new apartment May 15 of last year and on June 1 brought home Suttree, a one-and-a-half-year-old pug named for the title character of a Cormac McCarthy tale.

Unlike his namesake Cornelius Suttree, who gave up a life of luxury to become a fisherman, Suttree the pug lives large in downtown Baltimore. He goes for walks several times a day and likes to greet the other dogs residing in the building.

“He’s such a city dog,” Stimac quipped as Suttree pranced around with a gaggle of other pups in an artificial turf park opened by the Downtown Partnership of Baltimore across the street from his building.

Not all dogs have been welcomed at apartments.

A state law that made landlords responsible for dog-related incidents led many to enforce breed restrictions to keep out pit bulls, terriers and other breeds some consider more aggressive and potentially dangerous. The law was reversed a few years ago, but the restrictions remain in place at many buildings in the state, said Bailey Deacon, a spokeswoman for Baltimore Animal Rescue & Care Shelter.

As a result, hundreds of dogs are surrendered to BARCS by owners who are unable to take them to a new apartment, she said.

The restrictions, which are more common at large complexes, haven’t kept BARCS from getting thousands of dogs adopted, but, Deacon said, “if there were fewer places in the city that had breed restrictions we’d be able to place even more.”

Still, with more dogs moving in downtown, city planners see an opportunity to strengthen the neighborhood’s sense of community.

“Dogs force residents to get out of their units and interact,” said Kirby Fowler, president of the Downtown Partnership. “Dogs are part of the glue that creates a more interactive downtown.”

The Downtown Partnership organizes dog-friendly happy hours and has set up other small dog runs in unused corners of the city. A dog Census will be part of the organization’s next report on city dwellers.

There’s even a Facebook group, Downtown Neighbors & Dog Lovers, started by a downtown resident, that has grown to more than 70 members in five months.

“My sense is dogs are more important than cars for a lot of our renters,” Fowler said.

That rings true for Goodell, who takes Asher to the roof to play at least four times a day.

While he seems prepared to catch the ball for hours more, Goodell says it’s time to go. Asher leads the way to the elevator and down the hall to his eighth-floor home, with a tail-swishing swagger that says he is not only welcome here, but wanted.