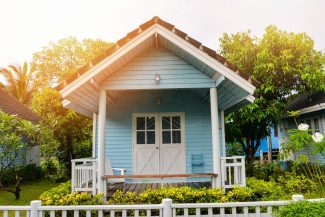 What is an ADU?

They’ve been around forever and have been called by many different names—mother-in-law suites, casitas, granny flats, cottages, small guest houses, etc. The official name of these secondary living quarters is Accessory Dwelling Units, or ADUs, and they are rapidly growing in popularity across the United States.

An ADU can take one of several forms. It may be detached, where the unit is separate from the primary structure, or attached to the primary home. Or the ADU may be a converted existing space, such as a bedroom, attached garage, basement, attic or storage area that is converted into an independent living unit.

Since it is not necessary to pay for new land, the ADU is an affordable source of monthly income for homeowners. Common multifamily building costs, such as an elevator, major new infrastructure or additional parking, are not needed and their wood frame construction reduces the higher expense of a new apartment building. Additionally, prefabricated ADUs save much of the time and money that comes with new construction. ADUs can provide as much living space as apartments and condominiums and work well when extended family members, particularly seniors, require a private residence in order to live independently of each other but still close by.

A JADU (Junior Accessory Dwelling Unit) is similar to an ADU but is built within the walls of a single-family home. The conversion is limited to no more than 500 square feet and may include a small kitchen. It may share the home’s HVAC and bathrooms. Both an ADU and a JADU may be built at the same time as the single-family home.

Often an ADU can pay for itself in just a few years with the income it generates while providing affordable housing options within an existing neighborhood for family members, friends, students, the elderly, in-home health care providers, people with disabilities, and others.

ADUs are encouraged in every corner of the country

Many states are amending their ordinances to encourage the development of ADUs in order to relieve local housing shortages. In December 2020, California released its updated Accessory Dwelling Unit Handbook which declared, “The state is falling far short of meeting current and future housing demand with serious consequences for the state’s economy, our ability to build green infill consistent with state greenhouse gas reduction goals, and the well-being of our citizens, particularly lower and middle-income earners.” It continued, “ADU law and recent changes intend to address barriers, streamline approval, and expand potential capacity for ADUs, recognizing their unique importance in addressing California’s housing needs.”

Forbes reported that California’s “AB-881, ‘Accessory dwelling units,’ and AB-68, ‘Land use: accessory dwelling units,’ will arguably have the most significant impact on the state’s housing market. These two bills will make California ADUs much simpler to build because it makes many of the current restrictions that cities place on ADUs obsolete. It also provides for a streamlined process for approvals.”

The New York Senate Judiciary Committee is currently reviewing Senate Bill S4547, “an act to amend the real property law, in relation to accessory dwelling units; and to amend the executive law, in relation to including an accessory dwelling unit in the term housing accommodations in human rights law.” The bill works with local governments to create regional ADU laws and defines an ADU as an apartment, located on a lot with a primary residence, that includes permanent provisions for sleeping, eating, cooking and sanitation. The New York bill provides that ADUs can be rented separately from the primary residence but cannot be sold separately; it requires that ADUs are rented for a term of no less than 30 days; and that the homeowner must continue to occupy the primary dwelling for at least one year after creating the ADU.

Florida has waived impact fees for an ADU if it “will be rented at an affordable rate to an extremely-low-income, low-income or moderate-income person.” The City of Orlando recently adopted an ADU ordinance with a clear intent to promote the use of ADUs. The ordinance allows ADUs in all single-family districts and does not require parking if the ADU is under 500 square feet. The size of the ADU cannot be more than 50% of the size of the principal unit and can be no larger than 1000 square feet. Owner occupancy is not explicit in the law while Pinellas and Alachua Counties specifically allow the property owner to occupy either the primary unit or the ADU.

Seattle has established its own alphabet for these small living quarters. According to Seattle.gov, “an accessory dwelling unit (ADU) is a separate living space within a house or on the same property as an existing house. These units are not legal unless they have been established through a permit process. A legally permitted unit in the home is called an attached accessory dwelling unit (AADU). A legally permitted unit on the property (but not within the home) is called a detached accessory dwelling unit (DADU) or backyard cottage. Tiny houses, with foundations, are considered DADUs.” Tiny houses on wheels are treated like camper trailers and must follow parking rules for large vehicles.

Financing the construction of an ADU

Lenders and banks have not caught up with the demand for ADUs, so the majority of homeowners are relying on their savings or home equity to pay for their projects. Most ADUs are financed through some combination of savings, second mortgages, home equity lines of credit and/or funds from family members. In fact, sometimes the backing comes from a relative who ends up living in it. Another solution is to refinance the property and take out the equity in cash. To encourage the construction of ADUs, some lenders work with homeowners using renovation loans.

But not everyone has access to the $50,000 to $250,000 needed to permit and build an ADU. Some municipalities have created their own financing programs, sometimes in conjunction with nonprofits who concentrate on affordable housing.

California’s Santa Cruz County offers homeowners loans up to $40,000 for permitting, impact fees, design costs and utility connections if they sign a deed restriction that requires them to rent the ADU or the main house at a low-income rent. According to the program, “The ADU Loan is provided at 3% simple interest, deferred for 20 years, and will be forgiven after 20 years if the ADU has been rented in compliance with the low-income restriction for the entire 20-year term.” The county requires that the homeowner must contribute at least 10% of the total ADU project cost.

Habitat for Humanity Monterey Bay (Habitat) partnered with the County of Santa Cruz and Senior Network Services, a social services organization for seniors, to create My House My Home, which is meant to help low-income senior homeowners build ADUs. The goal of the program is to build ADUs on the properties of qualifying low-income seniors, 62 years of age or older, providing additional income and adjustable living situations to help seniors age in place.

Over time, a single ADU might be utilized in various ways as the owner’s needs change. Just as the homeowner’s lifestyle may shift, so can the ADU’s purpose. Once a source of needed income, it may transform into a home for their parents, adult children, grandchildren or other loved ones. An ADU can provide older adults a way to downsize on their own property while a tenant or family member resides in the larger house.

As they say, everything old is new again and the concept of a granny flat has once again become relevant and popular, filling a variety of options for a variety of homeowners.