‘The upside is tremendous,’ one credit expert said. 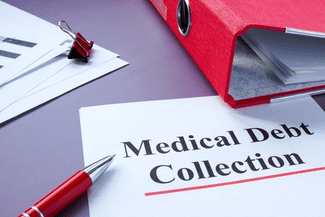 Paid medical debt is rolling off consumer credit reports in an overhaul that the credit bureaus say will improve people’s financial wellbeing.

In a time of rising interest rates and increased costs with the pandemic’s scariest days hopefully done, for some it can’t come a moment too soon.

Equifax, Experian and TransUnion are dropping the fully-paid debts from reports, effective July 1. Furthermore, it’s now going to take a year, instead of six months, before new unpaid medical debt shows up on a person’s report. What’s more, in the first half of next year, the three companies are taking unpaid medical collection debts with initial reported balances under $500 out of the reports.

Put together, the changes will erase 70% of the paid medical debt that’s been bogging down credit reports, according to an initial March announcement from the three credit reporting companies.

Americans amassed $88 billion of medical debt on their credit records as of mid-2021, according to the Consumer Financial Protection Bureau. Most of it was under $500, the agency said.

Improved credit scores are always going to make a difference in a person’s financial life, but scrubbing away medical debt may have special significance now.

Equifax EFX, -1.32%, Experian EXPGY, -0.42% and TransUnion TRU, -1.08% originally unveiled the announcement in March 2022, around the same time the U.S. Federal Reserve increased a key interest benchmark rate to fight inflation. The Fed raised rates on June 15 by 75 basis points, the third hike this year and the biggest since 1994, and officials have signaled that they are prepared to keep going.

“The idea of millions of people potentially having old debt just removed from their credit report is a big deal,” said Matt Schulz, chief credit analyst at LendingTree, which estimates 23% of Americans have medical-related debt.

“There’s very little in life that’s more expensive than crummy credit. With rising interest rates and rising inflation, the idea that people can get a boost on their credit score can be really helpful, because a higher credit score generally equals lower rates on things like mortgages, credit cards and car loans,” he said.

Credit reporting can be bureaucratic and mundane, acknowledges John Ulzheimer, a credit expert who formerly worked at FICO FICO, -1.36% and Equifax. But July 1 is “a watershed day” for its implications and potential consumer consequences, he said.

The practical effects of the removals are going to vary for each person, Ulzheimer noted. If a consumer has dings and other derogatory data on their report, erasing paid medical debt isn’t going to make much of a difference.

But if the debt is the one thing marring an otherwise “clean” report, Ulzheimer said the benefit of a removal could be substantial. “It could be the difference between an approval and denial, and an approval with a better interest rate. The upside is tremendous,” he said.

“Unexpected expenses, such as the cost of an unplanned medical visit, can be a hardship for many families,” the CEOs at Equifax, Experian and TransUnion said in a Friday joint statement. “These changes will realign our approach to medical collection debt reporting in a manner that is designed to help consumers focus on their personal well-being.”

How much can medical-debt removal lift a credit score?

If it helps your credit score, by how much will it help? It’s impossible to give one answer, Ulzheimer and Schulz said. There are too many variables about a person’s credit history to estimate the bottom line impact, they noted.

“It certainly does have the capacity or the potential of changing someone’s credit from fair to good, or good to excellent. Depending on where you are in these credit-score ranges; sometimes, it doesn’t take all that much movement to be significant,” Schulz said.

Even if the medical-debt removal doesn’t translate into a credit-score increase, Ulzheimer said it will not subtract from a person’s score.

It’s a point that’s come up as the Biden administration mulls mass student-loan cancellation of up to $10,000. There may be instances where loan forgiveness might decrease a person’s credit score. The move could blot out a data point that would let lenders gauge the creditworthiness of a person who has not yet amassed a financial track record.

The difference is when debt collection appears on a credit score, it’s inherently derogatory, Ulzheimer said. “No credit -coring system considers collections to be positive.”

Medical debt isn’t a good sign of a person’s capacity to pay back loans because they can’t control when major medical events happen, according to consumer advocates. “No one should have to worry about their reputation being sullied for years just because they got injured or sick,” said Patricia Kelmar, U.S. PIRG’s director of health care campaigns.

Starting this year, the No Surprises Act says people cannot be blindsided by bills for out-of-network medical treatment. Surprise medical bills have been a big contributor to medical debt, researchers say.

When can people see a difference in their score?

Medical debts with a $0 balance will be scrubbed from reports, but it doesn’t mean the score immediately changes. “There has to be some catalyst for your score to be calculated,” Ulzheimer said. That could be a car loan or mortgage application, a potential credit-line increase and so on, he explained.

As a result, it could be a matter of days for one person, or it could be months or longer before another person is involved in a transaction that prompts a look at their credit history, he said.

When it comes to timing, if anyone is seriously eyeing a major transaction now, like a car or home purchase, financial experts say they should lock in rates before another next climb up.

Also on the point of timing, it’s currently unclear when the three companies will take the next step of removing unpaid medical collection debt under $500 from reports. That will happen “in the first half of 2023,” the three companies said Friday.
Whenever the reporting does happen, that will be an important moment too, Schulz and Ulzheimer said.

But they noted the future changes also might carry peril because some people might be lulled into thinking they don’t have to pay a debt if it isn’t showing on their credit report. Consumers still have to pay the debts, and no one wants to deal with a collections lawsuit, Ulzheimer said.

How to check the removal happened?

Seeing that the changes when the debt is scrubbed from your credit report “could significantly improve your credit score,” consumer advocates at U.S. PIRG say, but they also advise people to double-check that paid medical debt is no longer being listed in their reports.

To spot potential errors and omissions, people reviewing their reports should check for “flags” on new debt, or in the report’s “account information” or “collections” portion, according to U.S. PIRG.

If paid medical debts still appear, the companies have dispute processes and timelines to resolve complaints. Consumers should check their credit history under all three companies, the organization advised.