San Francisco, Jersey City, Manhattan, Philadelphia and Boston saw the sharpest spikes in lease applications from the youngest generation of adults—Gen Z—with increases of up to 101% in the past year, according to RentCafe. 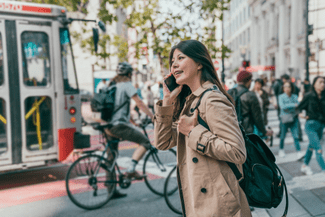 The only generation to record an increase in renting activity in the past year, up by 21% overall, Gen Z is playing a big role in the urban revival. Currently representing over a quarter of lease applications nationwide, Zoomers are swarming large urban hubs that promise job opportunities, bringing new life into cities that were once considered doomed due to the pandemic.

Zoomers are becoming a sizable presence in some of the nation’s largest cities: they account for more than one quarter of active renters in the past year in San Diego, Los Angeles, Manhattan and Philadelphia—all with a population of over one million. Likewise, according to Census data, 13 of the 20 trendiest cities for Gen Zers are large cities with populations of more than 250,000.

Like their Millennial peers who headed for the big cities in the years following the Great Recession, Gen Z renters are now moving to large urban areas that provide job opportunities and a vibrant social scene, after a one-year hiatus in their college towns or their families’ small towns in 2020.

Nationwide, the number of applications for apartments from renters of all generations increased by an average of 10% year over year, from 2.9 million applications in 2020 to 3.2 million in 2021. The increase in activity was mainly driven by the youngest renter group, the oldest of whom are 25 years old.

Compared to 2020, there were 220,000 more Gen Zers who applied for an apartment in 2021. Technologically savvy, extremely concerned with social issues and more diverse than any prior generation, Zoomers are starting to exert their influence in the housing market—they were the only generation to record an increase in renting activity in 2021.

The cohort of Gen Z renters is growing rapidly. In fact, of the 3.2 million applications for apartments analyzed, 27% were from Gen Zers—up from 23% in 2020. Aiming for the title of largest renting generation (which is currently held by Millennials with 45% of applications), Zoomers’ renting activity increased by 21% in one year, while lease applications from Millennials were down by 8%.

However, renting activity among Gen Zs slowed compared to the previous year, when their share had gone up 36% in 2020.

One reason for this may be the pandemic itself, which hit this generation particularly hard: half of adult Gen Z’s reported that they or someone in their household experienced job loss or significant pay cuts. Coupled with decreases in migration due to travel restrictions, these factors may have temporarily stunted the movement of the next generation of adults.

Gen Z Giving the Golden City Back Its Shine

The first group of true digital natives is flocking to the home of technological innovation: San Francisco. And, they’re not only breaking into the tech industry of Silicon Valley—they’re doing it with a bang. The No. 1 trendiest city for Generation Z, San Francisco, logged the greatest increase in Zoomers who moved into new apartments in 2021, at 101%. By doubling its share of Gen Z rental applicants, the Golden City seems ready for a revamp—and this young cohort is set on taking the tech world to the next level.

Meanwhile, the tri-state area in the Northeast remains one of the nation’s hottest regions, luring young renters back into the bustling urban scene. As a matter of fact, the East Coast took the rest of the top five spots, with Jersey City, NJ and Manhattan apartments in second and third place, respectively, for the highest spikes in applications.

The second trendiest city for Generation Z renters, Jersey City has seen a development boom as of late, especially in the downtown area. With an abundance of new buildings and plenty of nearby attractions, Chilltown has attracted almost double the amount (95%) of Zoomer renters that it did in 2020. Its vicinity to Manhattan’s financial district is a bonus, as work-from-home policies still in place allow Zoomers to live in areas within their budget, but not too far from the office in case full or partial reopenings will come.

The third Zoomer hotspot, Manhattan offers a substantial job pool that attracts many young renters to the city, recording a 63% spike in Gen Z rental applications in the past 12 months.

The Big Apple was followed by Philadelphia and Boston, which round up the top five hotspots for Gen Z renters. This year’s young renter migration continues the 2010-2020 trend of population increases in Philadelphia, turning the City of Brotherly Love into a post-Millennial hotbed, with a 60% change in share. Moreover, data from the U.S. Census Bureau showed that, in 2021, Philly also grew in diversity—ticking an essential box for the most multicultural generation.