What renters, landlords should expect as the federal eviction moratorium expires

Throughout most of the pandemic, Americans who are behind on their rent have been safe from evictions due to a federal moratorium imposed by the Centers for Disease Control and Prevention over public health concerns. But the Supreme Court said the moratorium must expire July 31 unless Congress passes new legislation. John Yang reports on how this could affect millions of Americans.

Throughout most of the pandemic, the federal government has been able to prevent many evictions for people who are behind on their rent. That is due in large part to a moratorium or ban imposed by the Centers for Disease Control and tied to public health concerns.

But the Supreme Court has said that the moratorium must expire, unless Congress passes new legislation. It ends this weekend.

As John Yang tells us, there is great concern about what could happen next to millions of people.

Judy, according to the most recent census data, more than six million Americans are behind on their rent, and nearly a million say eviction is very likely for them in the next two months.

One of them, Lela Jackson of Columbus, Ohio. 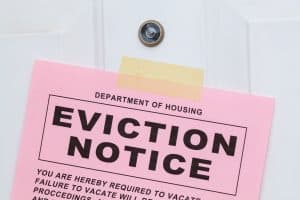 I can’t even apply for an apartment, to leave here, because I have two eviction filings, even though I still live here.

Since last year, Congress has allocated about $46 billion to help renters pay back rent and avoid eviction, but much of it hasn’t reached the people who need it the most.

Diane, thanks so much for joining us.

When this eviction moratorium expires this weekend, what’s your fear about what’s going to happen?

Well, the federal eviction moratorium has been a lifeline. It has been kept tens of millions of renters who otherwise would have lost their homes during a global pandemic stably housed during it.

It’s also been an essential public health measure that has helped to contain the spread of and deaths from COVID-19. Evictions are proven to cause both. So, as we look at the possibility of the federal eviction moratorium expiring this weekend, with 6.5 million renters still behind on rent, having fallen behind during the pandemic, it is deeply concerning that we will have both a wave of evictions and housing instability this summer and fall and further spread of and preventable deaths from COVID-19.

And with evictions potentially resuming, is there now an effort to get that money to the people who need it faster than it has been getting there? And what can be done about that?

Yes, there’s been an effort all along.

So, as of January of this year, renters were estimated to have accrued up to $50 billion in rent and utility arrears. The good news is that Congress provided enough money to address all the arrears that accrued during the pandemic. But the bad news is that the money has been very slow to get to renters and landlords who need it to keep tenants stably housed.

The number have been picking up. There are some states and cities that are doing very well, that are ramping up their programs, getting money quickly to tenants who need it. There are many more who are moving much too slowly. And, at this point, all of them, even if they give it their best effort at this moment, they can’t possibly reach all the tenants who need that money to stay stably housed before the moratorium expires.

In the last few weeks, as it was clear that this moratorium could not be extended, re-extended, the Biden administration has been stepping up initiatives to try to get the word out and try to make the money move faster.

Are you satisfied with what the administration has been doing?

They have been doing a lot.

They have been, I would say, appropriately aggressive in doing all they can to urge and empower and pressure states and cities to do more to spend their money, and it is having a positive effect. We have been tracking all emergency rental assistance programs. And when we have seen obstacles, when we have seen — when we have had concerns about how the track of these programs are going, we have raised those to the White House and the Treasury.

They have been responsive. They have put out good guidance. They have put out tools. Today, they have done a big effort to raise awareness about searchable databases to find emergency rental assistance. So, I do think that they’re doing much of what they can.

And I think that the Biden administration or Congress have to consider all options to continue protections for renters beyond Saturday, because we cannot as a country allow for this level of evictions and housing instability to proceed, especially as the Delta variant surges.

And, of course, the pandemic has been hard on property owners and landlords as well, not just tenants, especially small landlords, as opposed to the big real estate investment trusts.

What can be done to be help — or should be done to help small landlords?

Small landlords rely on rental income in order to pay their own bills, to keep the lights on, to continue to maintain and operate their properties. And it’s the smaller landlords who are more likely to be housing some of the lower-income renters who are falling or have fallen behind on rent.

Unfortunately, there has been a challenge in some communities, with landlords refusing to participate and refusing — in these programs refusing to accept these emergency rental assistance funds, which is slowing down the process for everybody. And, at times, it’s meaning that some of these lowest-income renters aren’t able to get any of the help terrorist they need.

Diane Yentel of the National Low Income Housing Coalition, thank you very much.