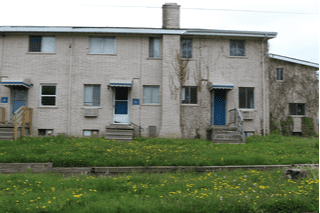 Though eviction moratoriums and the federal Emergency Rental Assistance Program were crucial in saving many low-income renters from being put out in the streets, thousands more moved in with friends, family and others to save money on rent.

Far from the marketing hype of some companies that co-living is a community-friendly and reasonably priced option for living in high-cost areas, financially forced cohabitation is a different animal — and one that carries heavy risks such as overcrowding. The dangers of overcrowded apartments were tragically brought to public attention when fires in such residences in Philadelphia and the Bronx killed 29 people, 17 of them children, between them in early January.

A survey conducted by nonprofit affordable housing developer and landlord NHP Foundation in December found that 44% of a pool of 500 respondents reported that they or a loved one were currently in a co-living arrangement for financial reasons. The respondents were selected from a pool of survey website Toluna members and were not intended to be a representative sample of the U.S. population, Toluna Vice President of Research Services Daniel Enson said.

Half of the respondents who reported being in financially driven co-living arrangements began such arrangements in the past two years, and 40% specifically cited pandemic-driven circumstances as a cause.

While not definitive, the NHP survey only confirmed what affordable housing landlords see every day: In low-income families, those with unstable living situations flock to those with stable ones.

“It’s pretty widespread throughout all of our properties,” said Ken White, vice president of Operation Pathways, a service-focused subsidiary of NHP. “Doing this research right now is timely because we’ve been noticing a lot of crowded housing.”

“Whenever there’s an economic downturn, we see it fairly frequently,” said Martin Muoto, founder and CEO of Los Angeles-based affordable housing company SoLa Impact. “With Covid, it’s economic, but there’s also less migration in the lower end of the market. Partly because of rent freezes, partly because of eviction moratoriums, people are staying longer and there’s more crowding.”

Though moving in with loved ones is often the only option to remain in stable housing for people at risk of eviction, such situations are not necessarily the safe option for everyone. It also carries serious downsides in the case of overcrowding. Of respondents in financially driven cohabitation in the NHP survey, 42% reported elevated mental stress as a result, while 37% reported depression.

“The pandemic’s hard enough, and then when you have a situation where your housing becomes unstable or overcrowded, it really takes a toll on mental health,” White said. “So there’s certainly been an uptick in mental health and addiction issues at our properties, which I’m sure can be tied back to the situation.”

To that point, nearly 1 in 5 respondents to the survey reported experiencing domestic violence as a result of their living arrangement. Last February, the National Commission on Covid-19 and Criminal Justice reported that domestic violence incidents had increased by 8% since the outbreak of the pandemic.

“Last week we were working with a woman who had been in an abusive relationship with her partner, and he had been forced out of the house — whether by courts or by her, I don’t know,” White said. “And she found that she couldn’t make ends meet without him, so she brought him back into the home.”

Financially forced cohabitation is also especially common and damaging for families with children, as unstable housing situations lead to a host of negative effects on childhood development.

But the safety element goes beyond the potential for domestic violence and instability for children, as the fire in Philadelphia demonstrated. The building where it occurred was a three-story duplex owned by the Philadelphia Housing Authority, and the dead — three sisters and their nine combined children — were 12 of the 14 residents of the upper unit, more than double the six that were accounted for when the family moved into the unit in 2011. One of the sisters had expressed concerns that their living situation was unsafe, a child psychologist who had worked with some of the children told The New York Times.

The pandemic was a shock to the economy that destabilized millions of low-income households financially reliant on service industry jobs, and the unprecedented surge in rent prices has affected seemingly the whole country. According to new data, masses of people flocking to cheaper places to live has been a key driver of rent growth in those markets.

Affordable housing is so difficult to come by that in many cities, housing vouchers or public housing represents coveted stability with protections not available on the private market. Unsurprisingly, most public housing authorities in major cities have years-long waiting lists as a result. While subsidized housing may be a common refuge for a resident’s family members who can’t afford housing on their own, it also comes with strict capacity regulations that can make for agonizing situations among the mission-driven landlords faced with overcrowded units.

“While our leases generally say [extra residents] can’t be there for more than 30 days, we try to work with the tenants,” Muoto said. “To us, an eviction is the worst outcome and something that we work very hard to avoid.”

Eviction is a devastating blow to a household in the short term, and in the long term, represents a black mark on a potential tenant’s financial history. Yet turning a blind eye to overcrowded apartments is just as untenable. The family that lost 12 of its members to the Philadelphia fire had been on a PHA waiting list to be moved into larger units due to their families’ growth since 2016.

Though NHP Foundation and SoLa Impact often bring in government agencies and nonprofits to help residents of overcrowded units or those at risk of homelessness for another reason, there is a cruel irony in asking residents of those units if they have any other family members with whom they can stay, like when a resident’s elderly mother moved into an already overcrowded unit at an NHP property, White said.

“We were able to find another family member to take the mother in, and they also had an adult, disabled resident living with them,” he said. “Sometimes families are out of compliance in terms of their housing contract, and we can’t fix it.”

“It keeps coming back to the fact that we don’t have enough affordable housing, so we have to make the best use we can of what we have.”