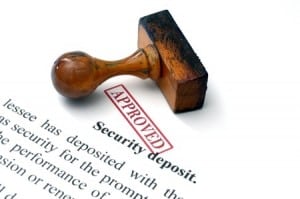 Silicon Valley has long had a fascination with transforming tedious analog tasks into frictionless, touch-screen enabled transactions. Having thusly disrupted taxi rides, banking, and shopping, apartment-hunting appears to be next on the list. Mom-and-pop landlords are slowly being replaced with tech-savvy ones, who use cryptocurrency, Venmo, and other apps instead of rent checks slid under the door. Now the online rental platform Rentberry is promising to reinvent the security deposit, too.

As my colleague Kriston Capps described it last year, “Rentberry turns Craigslist into eBay.” The service invites potential renters to fill out comprehensive online profiles and participate in an auction-style bidding process for housing—the best offer (and the most responsible-looking renter) wins. The company first ruffled feathers in San Francisco last summer, stoking fears that the site could jack up already outrageous rental prices. Company CEO Alex Lubinsky claimed that Rentberry’s approach would save some renters money by driving down prices in areas of lower demand; instead, in San Francisco and San Jose it raised rents by 5 percent. The service grew quickly from its 2015 California roots: Today it lists more than 220,000 properties in 4,948 cities and is used by more than 120,000 people.
Now, Rentberry says it has found a way to make security deposits cheaper for renters, hassle-free for landlords, and majorly profitable for anonymous third parties—all using cryptocurrency. They’ve received $28 million already from pledged subscribers, and their public token sale begins today, December 5.

Rentberry’s deposit scheme works like this: Landlords will now be able to use the platform’s existing online marketplace to charge a security deposit on a property, using Rentberry’s personal cryptocurrency (aptly, if ridiculously, called BERRYs.)

Instead of paying the deposit in full, however, the renters just put down the first 10 percent as a deductible. Then, a “community” of micro-lenders—a crowd that can range from one to thousands of people—foot the rest of the BERRY bill. Those lenders, in turn, charge renters a yearly interest rate, typically between 3 and 4 percent of the deposit. As with a normal security deposit, if the landlord doesn’t note any damage at the end of the lease, the initial deductible is returned in full to the renter, and the rest goes back to the lenders.

Say a rental deposit is worth $2,000. (The average rate on the site is $1,700, according to Lubinsky, but for ease of calculation we’re using a round number.) At the start of the lease, renters pay $200; lenders pay $1,800. Every subsequent month, renters pay the lenders around five bucks. All told, instead of paying $2,000 on day one, renters end up paying as little as $54 over a full year (assuming they get their original $200 back.)