Lawmakers passed the bill hours before the eviction moratorium was set to expire. 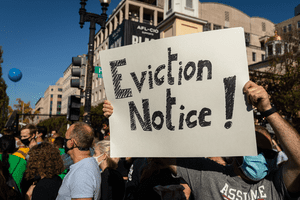 California lawmakers on Thursday approved an emergency bill to extend the state’s eviction moratorium until June 30, giving government officials another three months to disburse rent relief payments for tenants who have experienced financial hardship due to the COVID-19 pandemic.

The extension highlights the bureaucratic challenges thousands of California tenants and landlords have faced over the last year in applying and getting approved for billions of dollars in emergency rent relief. It also puts pressure on the state and local jurisdictions responsible for administering the funds to quickly get the aid out the door before July 1.

Assembly member Tim Grayson, a Concord Democrat and one of Assembly Bill 2179’s authors, said Californians who qualify for assistance should not be punished with eviction while they wait for payments to be processed through a system that both Republicans and Democrats have criticized.

“We are not going to allow Californians to suffer, to lose their homes or even their income because of application processing times,” Grayson said.

The bill now heads to Lt. Gov. Eleni Kounalakis, who is filling in for Gov. Gavin Newsom after he left the state Wednesday night on a family vacation. Acting governors have rarely taken action on legislation in the past. Kounalakis would be the first woman in state history to sign a bill into law.

Legislators finalized AB 2179 hours before the moratorium was scheduled to expire and evictions could resume on Friday, the latest in a string of eleventh-hour deals over the last two years to extend relief before a deadline. The state’s protections technically ended at the end of September. But to proceed with an eviction between Oct. 1 and March 31, landlords had to apply for financial assistance before they could file a complaint.

The extension will not cover every renter who is behind on their payments, only those who have submitted an application by Thursday and are waiting on the aid.

“There’s no question that many people are being left behind in this legislation,” state Sen. Ben Allen (D-Santa Monica) said during a Thursday Senate floor vote. “We are supporting this even though we know this is not complete legislation because we know it’s important for those who will be helped.”

California received $5.2 billion last year from the federal government and established the program to keep renters housed and landlords out of debt. The state was responsible for administering around $2.6 billion for the state-run system, while local governments that set up their own programs were responsible for the rest.

A separate program was established to help homeowners who had fallen behind on their payments during the pandemic, using $1 billion in federal aid.

Fewer than half of the 506,796 household applications submitted to the state’s rent relief program have been served, according to a dashboard that tracks the program. The average assistance per recipient totals $11,443, and the state has so far disbursed more than $2.5 billion. The dashboard does not provide data for how much the locally run programs have administered, though some jurisdictions that started with their own system have since joined the state’s effort.

The state-run program allows both landlords and tenants to apply and promised to pay up to 100% of rent and utility in arrears. Low-income residents hardest hit by the pandemic and most likely to be evicted were prioritized.

A state law approved in February, however, eased restrictions on who qualified for relief and allowed for state funds to be used to quicken the pace and reduce the backlog of applications. California in November also requested another $1.9 billion for the program from the U.S. Department of the Treasury and has so far received $200 million, though state officials said more is expected.

“The department remains absolutely committed to paying every eligible applicant,” said Geoffrey Ross, a deputy director at the state Department of Housing and Community Development.

Ross said the department’s goal is to finalize payments by “early summer.”

But during legislative hearings this week, lawmakers raised a list of concerns about how the program has functioned. They argued that there has not been enough outreach to make the public aware of the program, and that non-English speakers have struggled to navigate the application process. They requested that more staff be added to fulfill the program’s commitments and questioned whether the state could make the June 30 deadline.

“It’s almost like a facade, it’s almost theatrics,” said state Sen. Steven Bradford (D-Gardena) during a Wednesday hearing, referring to government having funds for the program but not the infrastructure to send the cash out quickly.

“We are here today because of poor staffing and poor preparation for this. So I think that should be a priority,” Bradford said.

Assembly member Buffy Wicks, an Oakland Democrat and the bill’s other author, said the Legislature first had to pass AB 2179 to ensure renters could stay housed. Then the Legislature should analyze whether the program “has been run effectively,” she said.

“I think we as a body need to have those conversations to ensure that if we are putting forward social safety net programs, that we are implementing those successfully and that we are helping the folks that we need and intend to,” Wicks said.

Gary DeLong, a board member of the California Rental Housing Assn., a group that opposed AB 2179, said small property owners have been “devastated” during the pandemic.

DeLong said the rent relief program is riddled with issues, and that an extension could force small landlords to sell their properties.

“We are hoping [the extension] will only affect a small number of people since the applications have to be filed by March 31,” he said. “And we are encouraging our smaller members to hang in there. Hopefully, the end is in sight.”

Daniel Yukelson, the executive director of the Apartment Assn. of Greater Los Angeles, also argued that “landlords are dying under this financial pressure.”

“There have been no resources really provided to rental property owners throughout this process,” he said. “It’s always been unbalanced and heavily favoring the tenants. It’s just not fair.”

But tenant advocates claim the opposite and have argued that AB 2179 falls short of what the state should do to keep tenants housed. One of their concerns is that the proposal contains a preemption clause, meaning it would supersede some — but not all — local eviction moratoriums, depending on when they were passed. It is a provision in the bill that helped reduce opposition from powerful groups such as the California Apartment Assn.

“Families did their part by sheltering in place to keep us all safe, at the cost of losing their livelihoods,” the group’s statement included. “The least California leadership can do is to ensure the success of their multibillion-dollar rent relief program by continuing to allow people to apply, lifting local preemptions, extending the eviction protections, and ultimately, keeping families in their homes.”