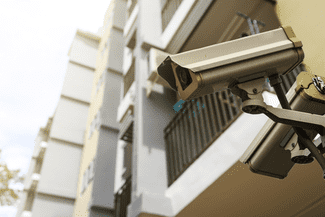 A substantial part of that market growth is fueled by homeowners and landlords installing cameras on and around their rental buildings. In total, some 42.5 million security cameras were purchased globally in 2020, according to Strategy Analytics. That statistic is expected to reach 120 million this year.

This rapid increase is the result of a convergence of favorable market forces. The cost of security cameras and surveillance gear have trended down in recent years (though inflation and a parts shortage in 2022 have offset – possibly temporarily – that trend). A burst of DIY innovations has simplified installation of security cameras, further reducing costs. Smart technology continues to evolve, introducing ever more options for things that home security systems can do and ways for using them. And of course, crime and public nuisance have not gone away.

All this adds up to a public realm quickly becoming saturated with video surveillance footage, at stores, banks, gas stations, post offices, apartment complex hallways, backyards, driveways and front stoops. And this isn’t even China, where you might assume you are being video surveilled any time you’re in public, especially in a city.

Surveillance cameras have been around since the 1940s, but it was in 1969 when inventor Marie Van Brittan Brown created the first video-based home security system. Security camera sales got a bump in the 1980s with high crime and lower price tags.

But it was in the late 1990s, when Wi-Fi was introduced, that the industry exploded. Now consumers could live stream their video capture on their computers, then phones and tablets, from anywhere in the world with a signal. Wi-Fi also eliminated the necessity for hardwired systems, leading to DIY innovations. The invention of Bluetooth technology paved the way for another industry boost as cameras entered the Internet of Things realm, equipped for interoperability and smart connectedness.

City, state and national governments have entered the surveillance camera market, too, in a big way. As of 2020, there were more than 770 million cameras in use globally (projected to be more than a billion by 2022), according to an analysis by Comparitech. Most of them are in China.

For landlords, installing security cameras makes sense on every level.

For daily rental maintenance, a camera system can save landlords time and inconvenience with simple monitoring. Did the landscaper mow the lawn as scheduled? Did the crew you hired clear snow from the egresses? Are your tenants hauling in a couch off the street that is likely filled with bedbugs?

These are a few examples of everyday rental management activities that can be facilitated with security cameras.

Security cameras are proven to be an effective way to deter crime and unwanted activity on and around your property. Especially for landlords who live off the premises or a distance away, cameras enable you to monitor comings and goings of tenants and guests. You can also keep track of contractors such as plumbers, electricians and landscapers, and track scheduled deliveries with a record of when they were left on a porch or in the entryway. When crime does occur, surveillance cameras assist law enforcement in pursuing perpetrators. And the presence and knowledge of cameras can provide comfort for tenants and management personnel.

In the long run, security cameras can also save landlords money. The presence of a camera is a discouragement to people considering vandalizing property, saving potential repair and replacement costs. That means fewer insurance claims and lower premiums. For that matter, most insurance companies will offer an outright discount off premium prices for customers who install security cameras.

But for those considering installing security cameras on their rentals, there are a few legal issues to be aware of.

Though Massachusetts has no laws explicitly regulating the use of security cameras, the state does have privacy laws that include the functions of surveillance cameras, such as recording people.

When you install security cameras on and around your rentals, you enter the legal arena of privacy, a hot-button issue. Landlords and property owners have legal rights to install surveillance cameras to help protect their rental properties. But in the United States, citizens also have rights to privacy in their homes and a right to know when they are under surveillance.

That includes inside rental units. Though a rental may be your property as a landlord, you have no right to place surveillance cameras anywhere inside a rental unit’s living or private areas, such as bedrooms and bathrooms.

Any cameras installed should be visible. And it’s advisable to inform tenants that there are security cameras on the premises. A sign or sticker near each camera is sufficient, but a note or verbal notice is even better.

In Massachusetts, you may not legally audio record anyone without their consent, according to MGL c. 272 s. 99, the so-called wiretap law. This is in contrast to most states’ requirements of only one-party knowledge of audio recording. Massachusetts law requires all recorded parties to consent to being recorded.

For video recording, a notice or sign in common areas suffices to inform people that they are being video recorded or surveilled. But in the case of audio, you have to go further than just a sign or notice by receiving their consent to being audio recorded. This is partly because sound can travel around corners and pick up from off-camera, where a disclosure sign isn’t visible. For this reason, most landlords install security cameras around rentals with audio turned off, so that only video is captured – with a clear sign designating the camera’s presence.

Cameras at rentals need to be installed with privacy laws in mind, including MGL c.214, S. 1B, the right of privacy law, and the wiretap law. To be certain you’re within legal compliance when installing cameras on your rentals, consult with an attorney familiar with your state’s privacy laws.