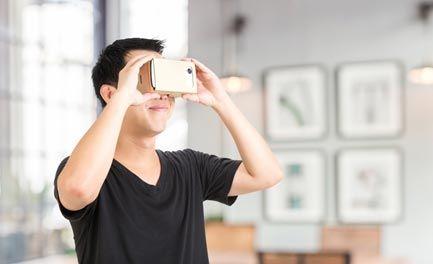 For apartment owners and managers, the pandemic means closed offices, few or no in-person tours and off-limits amenities, obliging them to market their properties without time-tested tools — at least for now.

Since March, apartment marketing, both to attract new renters and retain existing ones, has pivoted.

Now, the focus is on conducting contactless or virtual tours and emphasizing a different set of amenities, including a property’s safety features. There has also been a renewed interest in boosting a property’s social media presence, owners and managers say.

“Owners have long marketed the ‘wow factor’ in their properties, especially its amenities,” Swanson said. “But the pool and gym are closed. Now, the wow factor is the speed of the internet, how a property handles GrubHub and Instacart and other package orders, or neighborhood amenities you can use while social distancing.”

As the pandemic has unfolded, apartment managers have had to close previously important common-area amenities, such as pools, workout facilities and meeting rooms. In Washington, D.C., landlords are also obliged to refund amenity fees for facilities that can’t be used during the public health crisis. An emphasis on contactless viewing of what amenities a property still has up and running has grown.

“Prospective residents can take virtual tours via Realync, which is a touring platform enabling live and recorded video tours,” O’Connor said. “Or they have the option to take self-guided tours scheduled by appointment, with the models sanitized before and after.”

Since going virtual, Watermark, which owns and manages almost 4,000 apartment units in eight states, has opened four new communities for pre-leasing: The Haven and Dayton Station in Colorado, Magnolia in Texas and Thrive in Florida.

Though virtual tours have quickly become the norm, potential renters might not be entirely comfortable with them yet. About half of renters (52%) surveyed by Zumper, a nationwide online apartment listing service, said they still prefer to tour in person, despite the pandemic. But openness to virtual tours isn’t far behind, with 32% of respondents now preferring to tour virtually.

NexPoint, which owns 68 multifamily properties in the Southeast and Southwest U.S., has developed virtual touring materials available on YouTube, which it said makes sites more accessible while maximizing its reach.

“All [our] communities have moved to offering tours to prospective residents by appointment only, while emphasizing virtual touring options as much as possible,” NexPoint Residential Trust Executive Vice President and Chief Financial Officer Brian Mitts said.

The strategy seems to be working.

“While foot traffic is down, both scheduled and virtual tours are attracting highly motivated renters,” Mitts said, adding that his company’s tour-to-lease conversion rate has increased since March.

Tour-to-lease conversions registered as high as 80% weekly in early April, Mitts said. Those numbers dropped to a more normal, albeit reasonably elevated level, in May: above 50%.

Image quality is the most important factor when looking at an apartment listing, Zumper’s data found. Floor plans and listing descriptions are also significant, since renters find it hard to assess the size of an apartment via online videos or photos. 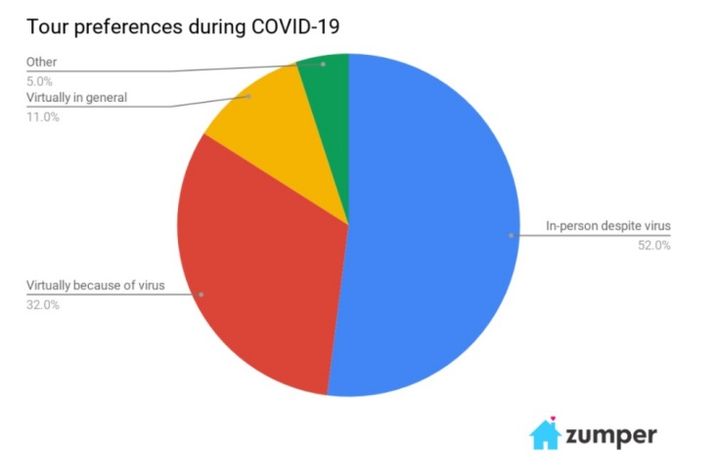 Courtesy of Zumper Many prospective renters still want to see units in person, according to a recent Zumper survey, though many are open to virtual tours. Property managers often will offer self-guided tours as well as virtual ones.

So while virtual tours might be standard now, they need to be high-quality to be effective, apartment marketing experts say.

Though they may open again eventually, the spotlight is now on other amenities, multifamily marketers said. Safety is at the top of that list.

To that end, Waterton has ramped up its presence on social media to get the message out, especially Instagram, according to Waterton Executive Vice President of Operations Lela Cirjakovic. Chicago-based Waterton manages about 50 multifamily properties nationwide.

“That’s a good fit for our target audience,” she said. “We’re also in regular contact via phone with tenants to check on their well-being.”

“We haven’t increased our social media budget per se but instead started running ads for properties that previously weren’t using their budgets,” Watermark’s O’Connor said.

Social media outreach can also be as simple as posting photos on social media of staff in the property’s PPE helping someone move in or explaining how social distancing is encouraged.

“It’s all about logistics,” Swanson said. “How do I tour the property remotely, sign the lease remotely, and what is it going to be like when I get there? How can I move in safely?

” Communicating about safety, especially about COVID-19 cases at apartment complexes, is important because tenants need to know if they might have been exposed. But landlords also have an obligation to protect the privacy of tenants who have come down with the disease.

“We’ve had a small number of notices from residents stating that they have entered into self-quarantine protocols, with all known quarantined patients cleared now,” Mitts said.

“In those cases, we sought counsel from the local health department when communicating to staff or other residents about the situation,” Mitts said. “We follow all CDC guidelines for our communities.”

Besides safety, the pandemic means some amenities are now being stressed more than others. Common areas aren’t so important at the moment, but amenities that facilitate successful sheltering in place are increasingly important, such as a system that facilitates package delivery.

“The one amenity we cannot falter on is packages,” Cirjakovic said. “We know that more people are receiving more deliveries than ever. In most of our communities, we have package lockers accessible 24/7, and we let prospective renters know that.”

“Prospective buyers and renters are looking for private spaces, such as balconies and patios, now more than ever,” he said. “On top of that, they’re also asking a lot about well-kept outdoor amenity spaces.”

Recently, members of Waterton’s corporate team expressed their gratitude to on-site associates for the work they do via posted notes or video clips, Cirjakovic said.

“That got a large response,” she said. “Marketing apartments now is more than just getting leases signed. It’s about finding ways to connect with both tenants and prospective residents in an authentic way during an unsettling time.”