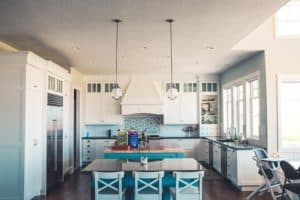 She has not only a new husband (Ant Anstead, with whom she seems to argue much less), but also a new show, “Christina on the Coast,” which highlights her budding design business.

And now that this first season is in full swing, with the third episode airing this week, we were excited to see her home in on what is perhaps the most important room in a home: the kitchen.

In the episode titled “A Colorful Kitchen Makeover,” Christina is remodeling a kitchen for Sam and Hana Lee, in the Southern California town of Tustin, in Orange County.

The Lees have a small suburban home that they almost completely renovated themselves—then their baby came along, and they had to stop before they could finish the kitchen. They want Christina to step in and renew it, getting rid of the ’70s salmon-colored Formica countertops and dark brown cabinets that make the room look cramped and dated.

As she works to sort out the Lees’ kitchen, Christina teaches us a thing or two about what works—and doesn’t—in this all-important space. Read on for her latest design tips!

All white is not all right

Hana thinks white on white on white will make her small kitchen look larger, cleaner, and more stylish. Christina, however, thinks this is a great way to ruin a perfectly good kitchen remodel!

The reason? All that white will appear sterile and monotonous. She’s wiling to give them white Shaker cabinets and white quartz countertops, but wants to put a pop of color in the backsplash.

She cleverly warms her clients to adding color by taking them to a home store, and first picking out wild, circus-hued tile that makes their eyeballs pop.

“Just kidding,” she says, as she slides a much more elegant navy blue tile sample their way. It’s such a relief, they immediately accept it—and it absolutely makes the kitchen.

Frame a window with tile

If you have a giant window in your kitchen, try highlighting it “so it looks like a framed picture” says Christina. She extends the navy blue backsplash tile right up and around the window, drawing the eye toward the ceiling, making it appear higher. Good call!

Brushed brass can warm up your kitchen

With all of that navy and white, the kitchen looks almost too cool. The Lees’ first instinct was to select brushed nickel fixtures, because they like that clean, traditional look. But Christina steers them toward brushed brass, which totally warms up the place and gives it more of a designer touch.

Instead of having dark, hulking upper cabinets taking up space and light in the kitchen, Christina replaces them with open shelves. They may not store as much, but they help keep you organized while putting your dishes on display.

Going from electric to gas can cost a pretty penny

Christina is cautious when the Lees tell her they’d like to swap in a gas stove for the existing electric one.

“That can be expensive,” she tells them, explaining that if an electric stove is installed, there usually isn’t a gas line anywhere near it.

Contractor Izzy Battres confirms this news, telling the couple if they want a gas stove, he’s going to have to run a gas line through their house. Hiding it in the ceiling will cost a whopping $4,800 extra. Or, he could run it outside over the patio and leave it exposed, but painted to blend in. It won’t be as nicely hidden, but it will cost only $1,700. The Lees opt for the latter.

A quick and easy fireplace makeover

The kitchen is now light and bright, and opens to the family room, which has a dated, red brick fireplace at one end. It sort of sucks up all of the light and draws attention away from the clean, modern kitchen. Christina suggests redoing the fireplace by simply whitewashing the brick. That softens the color and makes a huge difference for very little cash.

Does Christina Anstead’s design do the trick?

The Lees are thrilled with their new kitchen, as they should be.

“Everything works perfectly,” says Hana, who admits Christina was absolutely right about adding color to the room.

And although they went a tad over budget, spending $40,300 rather than the $38,000 they’d planned, having a gas stove is well worth it. So, mark this as another win for Christina’s budding design business!