Home·Property Management·Real Estate is Booming: An Unexpected Result of the Pandemic

Real Estate is Booming: An Unexpected Result of the Pandemic 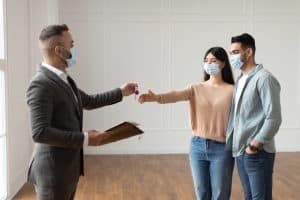 Who could have predicted that a global pandemic would be such a boon to the real estate market? Since Spring 2020, aided by interest rates generally hovering around a low 3%, single-family and multifamily home sale prices have skyrocketed along with rental rates.

As a result of COVID-19, the pandemic normalized working remotely and that trend helped power U.S. home sales last year to the highest level since 2006, the peak of the last housing boom. The inventory of homes for sale nationally fell to a record-low of 1.03 million units by the end of February 2021, or about 30% below what it was a year earlier, as reported by the National Association of Realtors.

The California market is a prime example of an area where prices are achieving new highs almost daily. According to the California Association of Realtors, in May 2020, the median price for a single-family home in California was $588,070. Just one year later, the same house sold for a median price of $818,260. In addition, the market share of $1 million home sales in California has increased more than 200 percent during the same period.

Multifamily units are also experiencing heady price increases. In May 2021, the Los Angeles Metro area condominium and townhome market recorded an increase in the median sales price of 3.9 percent, up to $592,000, over the previous month.

The median condo price in Southern California increased by 23.3% YTY and 2.9% MTM to reach $540,000 in June 2021. Condo sales in all the counties grew at a massive rate from the previous year with Ventura County recording the highest growth of 178.7%. Los Angeles condos sales were up by 148.1% from the previous year. The months’ supply of condos in Southern California is 1.6, down by 3.5 months since last year.

As selling prices have increased, so have rents

Not only have the sale prices of condos and townhomes risen dramatically over the course of the pandemic, multifamily asking rents increased by 6.3 percent on a year-over-year basis in June 2020, as stated in a just-released report from Yardi Matrix. The report attributes this unprecedented increase to people moving because of the pandemic, job changes or losses, government stimulus and/or a hot housing market that has made home ownership prohibitive.

Interestingly, of the 20 U.S. cities with the greatest increases in rent through June 2021, 18 of them are in the southern part of the country. Florida has the highest number of any state on the list, with seven of those coastal cities. Rent prices in those cities tend to be higher than average with 14 of the 20 municipalities posting a median rent level eight to 36 percent above the national average. As an example, Tampa Bay’s average asking rent rose 15.6 percent in the first half of 2021, making it the second highest in the country, according to data from CoStar Group, a national real estate data company.

Rents are also growing rapidly in both the Southwest and Southeast. Phoenix is up 17 percent; not far behind are Las Vegas at 14.6 percent and Atlanta at 13.3 percent. “These metros were lower cost compared to larger gateway metros, but with double-digit rent increases, the affordability of these metros has begun to decline,” Yardi Matrix said in the report.

While San Jose, Washington, D.C., Boston and Minneapolis have seen rents increasing for five consecutive months, Boise continues to rank #1 for fastest year-over-year growth. The city, which saw rents jump by a stunning 6.6 percent in June 2021, is up 31 percent since the start of the pandemic.

COVID-19 is a major contributor to rent increases

These statistics are certainly the result of the new social and employment conditions brought about by COVID-19. Almost immediately after the beginning of the lockdown, about 3 million adults moved in with their parents or grandparents, bringing the number of adults living “at home” to the highest number on record.

Job loss during the epidemic and the need to work from home moved many people to transfer to another area. Some wanted to live closer to their families during the height of the pandemic while others took the opportunity to “try out” another area. Government stimulus checks, enhanced unemployment benefits and more than $45 billion of direct renter payments gave Americans the wherewithal to move around the country.

Yardi Matrix pointed out that “…the increases represent growth in what landlords are asking for (in) unleased apartments. Increases are smaller for tenants that are rolling over existing leases.” The report added, “Rent growth will not be able to continue at these levels indefinitely, but conditions for above-average growth are likely to persist for months.”